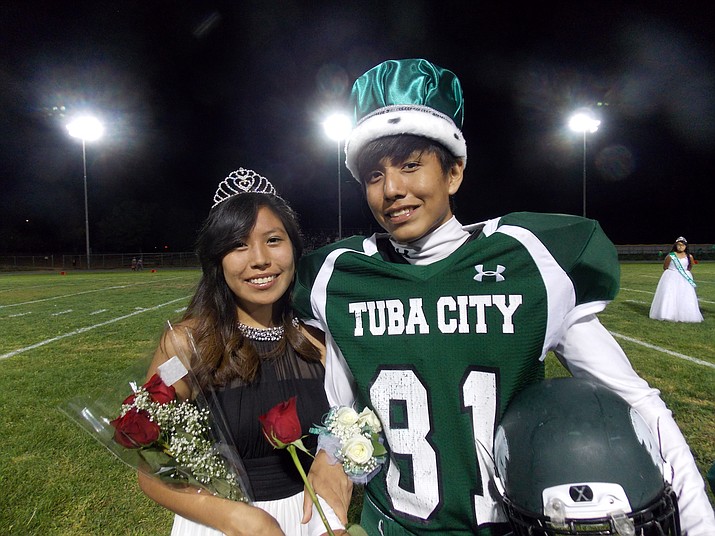 Tuba City High School junior ROTC program led the way at the homecoming parade that started in upper Tuba City and ended at the Warrior Pavilion at the high school. Rosanda Suetopka/NHO

This year’s homecoming theme was “May the Warrior Force be with You” which was selected by the graduating class and their class sponsor, Vilma Macaraig. The theme was selected with the intention of promoting “Warrior Pride” throughout the community with highlighted career accomplishments from past alum of TCHS.

The grand marshalls for the parade were Delight Preston, a longtime Tuba City teacher and Eugene Begay from the Education Talent Search program at Northern Arizona University.

Parade marshalls were selected by the senior class based on their contributions and support extended to students at the high school and scholarships provided by NAU through Begay’s program.

“This years’ homecoming activity was really hectic. It seems like anything that could go wrong, did, but TCHS has an amazing student council who worked through all the obstacles to make this the best homecoming possible,” Nockideneh said. “They not only organized each daily school activity but they oversaw each event as I was on maternity leave. They did an awesome job and deserve all the credit. Our TCHS Principal RayeLynn McCabe and Athletic Director Jamie Roe also helped them every way they could so the students and the community could enjoy it.”

Royalty for the junior class were DiiZhonia Stanley and Daylon John, — Thomasina Wero and Aric Bradley for the sophmore class — Shantel Manygoats and Justin Dash for the freshman class and for LIFESkills - Justin Guitierrez and Kallie Morgan for LIFESkills.

Many of the parade floats featured “Star Wars” characters and school pride shirts were sold during the parade and at the game.