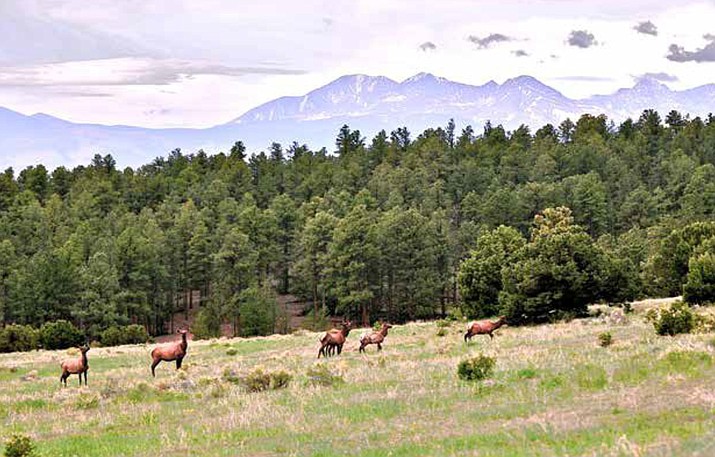 The Navajo Nation finalized the purchase of Wolf Springs Ranch in Colorado Oct. 27. The Nation plans to change the name to Ma’iitsoh Bito’, which is the Navajo translation of Wolf Springs. Submitted photo

In acquiring the ranch, the Nation will change the name to Ma’iitsoh Bito.’ which is the Navajo translation of Wolf Springs.

“The Office of the President and Vice President (OPVP) has realized the potential to expand our landmass to include aboriginal land located in Colorado, a state that our boundaries don’t currently extend to. We know that our ancestors lived in this area and we look upon Tsisnaasjini’ with great reverence as it’s our sacred mountain. This purchase is in essence a great victory for the Navajo Nation,” said Navajo Nation President Russell Begaye.

The acquisition of the Wolf Springs Ranch gave the Nation around 16,350 acres of prime ranch property that currently supports cattle and bison operations. The purchase includes approximately 200 head of cattle and over 300 head of bison.

The purchase is guided by a NABI resolution that requires OPVP to put a plan in place regarding usage of the property.

“OPVP is, and has been, creating plans based on principles of preservation and development, while carefully vetting them against market and feasibility studies,” President Begaye said.

The Wolf Springs ranch was purchased utilizing the Land Acquisition Trust Fund (LATF), which will also be used to pay for the yearly property taxes.

“The LATF was put in place by the 15th Council, who also created the Permanent Trust Fund (PTF),” said Peterson Zah, Ambassador of OPVP. “They initially created the fund with $10 million dollars knowing the tribe would need future resources to purchase land. It wouldn’t have been possible if it weren’t for the 15th Council and we need to acknowledge their foresight in this.”

The Nation’s purchase of the ranch is optimum in expanding its land capital beyond traditional reservation boundary, said Vice President Jonathan Nez.

“The purchase of the Wolf Springs Ranch is an example of the Navajo Nation investing in its future, just as we have in creating both the PTF and LATF,” Nez said. “The property is a great asset to the tribe. It’s time for the Navajo Nation to take back it’s aboriginal land, even if we have to purchase it.”

In a press release, the OPVP thanked the Navajo Nation Council for their support in the purchase of the Wolf Springs Ranch with special thanks to Delegate Dwight Witherspoon (Black Mesa, Forest Lake, Hard Rock, Pinon, Whippoorwill) who was the primary sponsor of the Wolf Springs Ranch legislation and Delegate Steven Begay (Coyote Canyon, Mexican Springs, Naschitti, Tohatchi, Bahastl’a’a’) who was the co-sponsor.