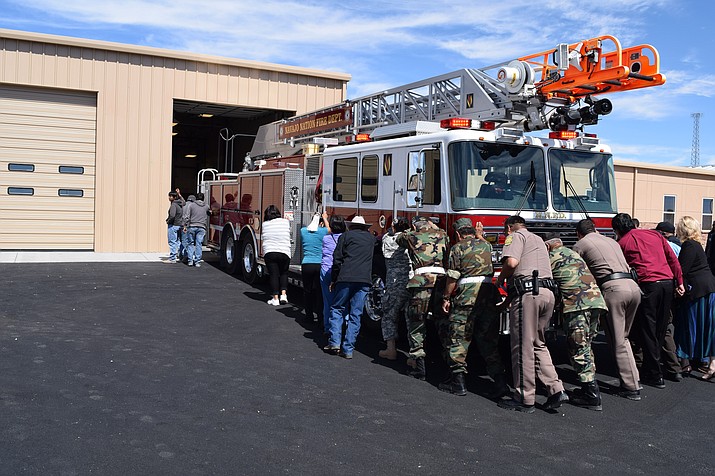 Navajo Nation Council Speaker LoRenzo Bates (Nenahnezad, Newcomb, San Juan, Tiis Tsoh Sikaad, Tse’Daa’Kaan, Upper Fruitland), who was a guest speaker at the event, described the new facility as a sign of progress for economic and community development, and most importantly, for providing public safety for all local communities.

“Seeing the results of the Nation’s investments is exciting and marks a significant and historical movement toward growth, stronger partnerships and prosperity,” Bates said.

He also described how the Navajo Nation’s investments are fulfilling priorities set forth by the establishment of the Síhasin Fund. He thanked the NNGE for helping the Nation to leverage the funds by paying all of the pre-construction costs associated with the new development.

The Council adopted legislation to create the Síhasin Fund in 2014, when the Navajo Nation received $554 million from the federal government as part of a settlement agreement related to litigation over the historical mismanagement of the Navajo Nation’s trust assets. The settlement funds were deposited in the Síhasin Fund in order to earn interest and to grow the balance.

Based off of the results of seven public hearings conducted by the Council, the Síhasin Fund Subcommittee was created and tasked with developing expenditure plans to use the money to address several critical needs, including community and economic development.

“We are proud that this project was fully funded by the Nation,” Tsosie said. “This project is a reflection of self-determination, because we built this facility without assistance. This completed project illustrates that the Nation can achieve on our own.”

He added that he wants to see the construction of a new travel center near the casino facility, which the Council also approved.

“The new substation will create more opportunities and encourage the Division of Public Safety to build more substations throughout the Nation,” Yazzie said. “We, the people, and leadership have reached this goal together.”

The 15,000 square-foot facility, located northwest of the Twin Arrows Navajo Casino Resort, will provide office space, living quarters for personnel, holding cells for inmates, training rooms and a garage bay for fire trucks. The substation will house police officers along with a sergeant, five firefighters and emergency medical services personnel, who will also provide services within the surrounding communities of Leupp, Tolani Lake, Tsidi To ii, and Dilkon.

Division of Public Safety executive director Jesse Delmar thanked Council members and the Office of the President and Vice President for investing in and supporting public safety initiatives.

“The Council worked very hard for the substation to become a reality,” Delmar said. “The division wants to thank them for being here with us today to celebrate another milestone for public safety.”

NNGE director of development Mary West also recognized and thanked the various entities who contributed to the development including the NNGE board of directors, NNDPS, Leupp Chapter, Navajo Gaming Regulatory Office, SICON – LLC, Arviso Construction and others.