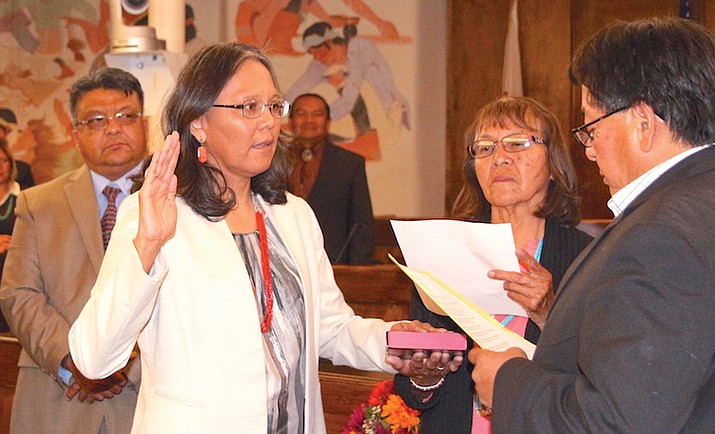 Tina Tsinigine takes the oath of office administered by acting Navajo Nation Chief Justice Thomas J.Holgate after being confirmed as a probationary judge by the Navajo Nation Council.

“The Nation’s courts are overwhelmed with high loads of pending cases and the lack of judges to address violent crimes raises many concerns within the justice system. The two appointments would help the cause to address justice,” Yazzie said.

According to the Judicial Branch, Tsinigine has worked nine years as a staff attorney at the Tuba City Judicial District and is a member of the Navajo Nation Bar Association and the Arizona State Bar Association.

Resolution No. LOCJN-05-17 found that Tsinigine met the qualifications to serve as a probationary district court judge. Pursuant to Title 7 section 355(B), Tsinigine will be appointed for a probationary period of two years. Council approved Legislation No. 0266-17 on Tuesday with a 12-1 vote.

“The appointment of a permanent district court judge, Chief Justice, or associated justices is a lengthy process. Malcolm Begay has completed the process and he was highly recommended by the former acting Chief Justice Allen Sloan. The LOC appreciates the completed work to confirm Begay as a judge,” he said.

According to the legislation, Judge Begay served his two-year probationary term as a district court judge at the Kayenta District Court.

On April 26, the LOC approved legislation recommending the permanent appointment of Judge Begay, which was sent to President Russell Begay, however, no action was taken.

Pursuant to Title 2 section 601(B)(11), it is authorized to present directly to the Navajo Nation Council the issue of permanent appointment of any probationary justice and judges, whom the LOC and the Chief Justice have recommended for permanent appointment and which recommendation to the President has failed to convey to the Council within 60-days of receiving the recommendation.

During the legislation discussion, many members of the Council stressed many concerns regarding domestic violence, missing persons, substance abuse offenses, crime sentencing, court proceedings, out dated criminal and civil laws, and the importance of using Navajo culture and language within the court system.

In response to the questions, Judge Begay said, “I completed four-years of my probationary term as a judge at Kayenta Court and it was challenge due to the lack of judges. There are many challenges within the justice system of the Nation and I will do my best to uphold my responsibilities and address the Council’s concerns as a judge.”

Judge Begay and acting Chief Justice Thomas J. Holgate thanked the Council and the LOC for the continuous support to fulfill the appointment of judges on the Nation.

The Council approved Legislation No. 0271-17 with at 15-5 vote Oct. 18. Following the vote, Judge Tsinigine and Judge Begay was sworn-in by acting Chief Justice Holgate following the Council’s approval of the legislation.