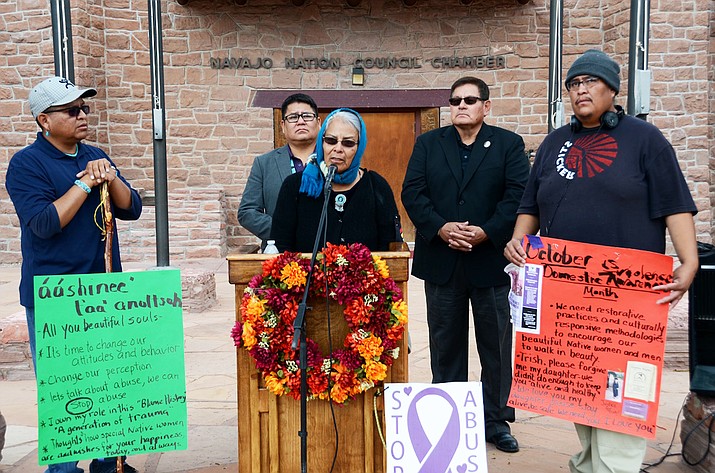 “Grandma Emma” walks to the capital of the Navajo Nation with council members Oct. 19. Submitted photo

WINDOW ROCK, Ariz. — On Oct. 19, Navajo Nation Council Speaker LoRenzo Bates and delegates showed support for Emma Thompson as she made her way on foot to the capital of the Nation to bring awareness to victims of domestic violence.

Thompson, also known as Grandma Emma is from the community of Tohatchi. Bates and Council Delegate Nathaniel Brown walked with Grandma Emma as she made her way into Window Rock on the morning of Oct. 19 after she began her journey Oct. 18 in Gallup, New Mexico.

A few family members carried signs drawing attention to Domestic Violence Awareness Month, which is recognized during the month of October each year, as they joined Grandma Emma, who wore a sign that read, “Trish, please forgive me my daughter — we didn’t do enough to keep you alive and healthy. We love you my daughter,” in honor and remembrance of the life of her daughter, who died three years ago because of domestic violence.

The group arrived at the council chambers just before noon where Council members, staff, local media and others welcomed them. Grandma Emma addressed the crowd as she made an emotional plea for the public and the Nation’s leaders to focus more attention on social problems that often lead to domestic violence.

She was joined by several other council members outside the council chambers, including Council Delegate Otto Tso, who offered words of encouragement and condolences to Thompson and all other victims of domestic violence, while acknowledging that more needs to be done to help victims.

Bates thanked Grandma Emma for taking the initiative to begin her walk and for reminding the Nation’s leadership of the problems associated with domestic violence. He also pointed out that through the Council’s Sexual Assault Prevention Subcommittee, the council is making progress to amend laws to help deter several offenses, including domestic violence.

Arizona State Rep. Wenona Benally (D – Dist. 7) also participated in the walk and spoke in support of victims while providing information regarding the large increase in phone calls from victims of domestic violence. She said the Navajo Nation has received nearly double the number of crisis calls from victims within the last three years, rising from over 3,300 calls to over 6,400.

On Oct. 20, Grandma Emma continued her journey to raise awareness for domestic violence victims, as she continues her walk to the community of Chinle, which located nearly 70 miles from Window Rock.