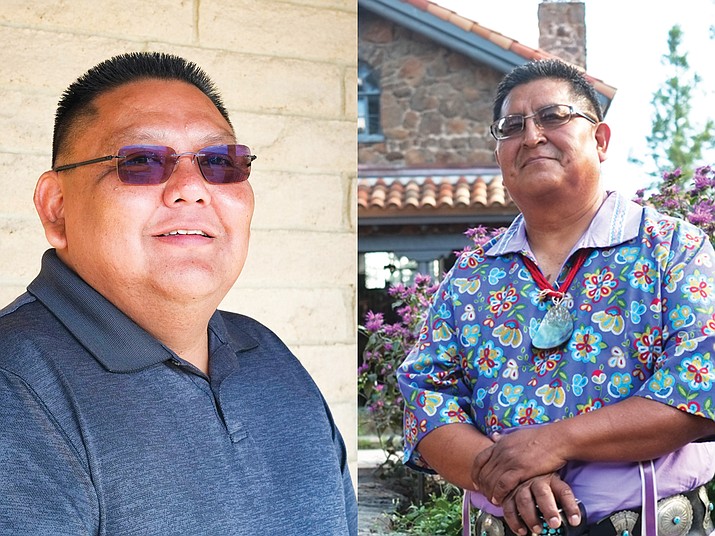 POLACCA, Ariz. — The vice chairman debate was held Oct. 11 at Hopi Jr/Sr High School (HJSHS) with about 45 people in attendance. The event was also streamed live on Facebook.

The forum was sponsored by Future of the Hopi Forum, a grassroots group. Bruce Talaswaima and Jennifer Himel served as moderators.

In the vice chairman’s race, Lamar Keevama, a resource planner for Bacavi Village, said everything the tribe does relies on money. There are concerns with the planned closure of the Navajo Generating Station in about two years, since about 80 percent of the tribe’s revenue comes from the related coal mines.

“But the main opportunity is out there,” he said. “My main focus is on economic development.”

Keevama said he is working diligently with the tribal council on economic development projects.

Vice chairman Candidate Clark Tenakhongva, who is retired from the Veteran’s Administration, said the Hopi Tribal Council should be driving the wheel toward one school district with a unified curriculum.

Tenakhongva and Keevama both support the TED grant being used to study unifying the schools. Keevama said he also respects the community involvement in their decisions.

Keevama serves on the Hopi Tribal Council and Tenakhongva questioned why no action has been taken on this. Keevama responded that he has been talking with teachers and board members. He found they have mixed feelings about creating a unified school district. He said communities are territorial, but he agrees students at each school should be at the same level.

Keevama said there are shortfalls at HJSHS that need to be addressed.

“There are a lot of intelligent students that want to be challenged,” he said.

The vice chairman candidates were asked what they would do about tribal employees who were not doing their jobs.

Keevama said he supports their removal because he worked in the corporate world where those who didn’t do their jobs were not tolerated.

“Some think they are untouchable, but I grew up knowing that anyone can be replaced,” he said.

Keevama said as vice chairman he would rely on the chairman and executive director because they have the duty of dealing with the employees.

Tenakhongva said he agreed with Keevama, but would add to it that chairman, vice chairman and tribal councilmembers should be removed if they are not doing their jobs.

Regarding the coal issue, Tenakhongva said he does not support coal and that globally coal use is declining. He said the Hopi Tribe has known for the past 25 years that coal was on its way out and thus should have had an economic plan to replace it.

“This is a failure of all past administrations,” he said.

Keevama said all of the mining is now on Navajo land, but Hopi does receive royalties from the Navajo Partitioned Land. He said a letter was recently sent to the state asking about the taxes they received from Peabody. He said the Hopi Tribal Council is pursuing a solar project.

Regarding drugs and alcohol, Keevama said the Bureau of Indian Affairs needs to be held accountable for not providing enough law enforcement and lacking a detention center. He said he hears repeatedly that many are on drugs or alcohol since there is nothing to do because of the lack of jobs. He said more youth facilities and youth programs are needed.

“We can combat it, but it will take money,” he said.

Tenakhongva said when he was growing up there were no youth centers, but they adapted to the environment.

Keevama said there are more problems today because of media influences with the glorification of gangsters, violence and money.

Tenakhongva said everything starts at home. He said Hopis can use their language as a powerful tool. He said too many have become sedentary by watching TV.

Keevama said his fellow tribal councilmen have appointed him to lead various committees because of his leadership.

“That’s what you need to move something forward,” he said.

Tenakhonva pointed to his experience in the military as well as on school and village boards. He said he was among those who pushed for the medals that the Hopi Codetalkers received in 2013.

“It’s always been a team effort,” he said.

Tenakhongva said as president of the Hopi Livestock Board, he was among those who were able to get higher prices for the Hopi ranchers.

Keevama said while working on the tribal council that they are moving some developments forward. He said legislation has been drafted to move two projects forward, but they are not yet completed.