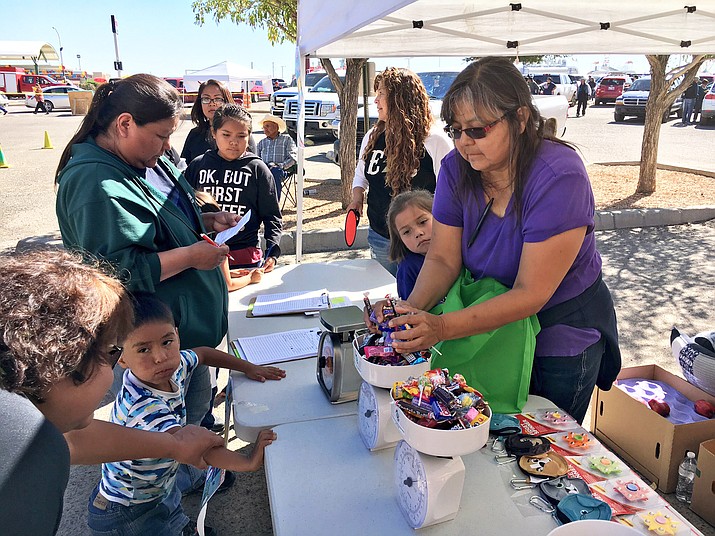 Charlene Begay (right), program supervisor for the Navajo Special Diabetes Project for the Shiprock area, weighs in over two pounds of candy brought in by a little boy (second from the left) after the parade Oct. 7 at the Northern Navajo Fair. Submitted photo

WINDOW ROCK, Ariz. — Nearly one hundred pounds of candy was exchanged for toys by children and adults Oct. 7 at the Northern Navajo Fair.

Navajo Nation Vice President Jonathan Nez encouraged children to bring candy collected on the parade route to exchange for toys such as spinners, balls, hula hoops and other items.

The Navajo Nation Special Diabetes Project (NNSDP) helped coordinate the activity in front of its old office near City Market.

Nez was pleased with the line of kids with bags of candy in hand as they stood waiting to exchange candy for gifts.

“I am very happy to see this wonderful response from our children in exchanging the parade candy for volleyballs, basketballs and spinners,” he said. “President Russell Begaye and I are in support of health among our people. We want to do everything we can to fight diabetes and other chronic diseases among our people. A lot of times, we send mixed messages to our children when we say we want them to be healthy and strong, then we turn around and give them candy at the fair parades.”

Eight staff members from NNSDP were on hand to assist with the vice president’s Candy Exchange Project.

“NNSDP encourages, monitors and advocates to increase physical activities, diabetes education and nutrition education in schools and various communities,” Begay said. “Under our key measures, our program has to identify numbers of youth between the ages of 5-17 who are screened for overweight and obesity for the fiscal year.”

Nez said the collected candy will be shipped by the Navajo Nation overseas during the upcoming holidays to service men and women in the military.

The “Candy Exchange Project” was held at the Western Navajo Fair in Tuba City Oct. 14, 2017, following the parade.