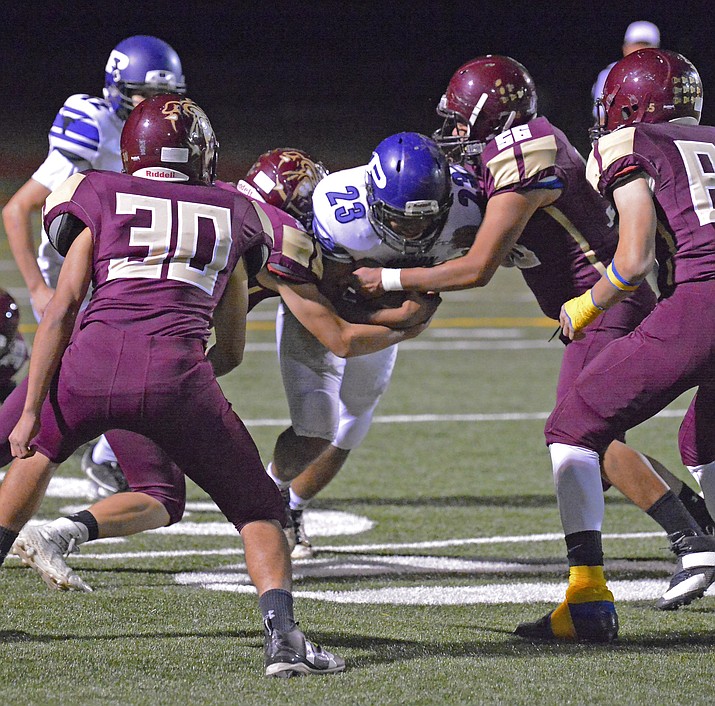 The win improved Payson’s record to 2-7 and dropped Winslow’s to 5-3. The loss may have damaged Winslow’s chances of a favorable playoff seeding and a first round home game.

Both teams were playing without important injured players. Winslow was without Ahli Foster, Damon Avelar and Yoaan Djassa. Payson lost their starting quarterback Brock Davis and was playing with freshman Trevor Cline at that key position. He played well and was largely responsible for the victory.

Both teams exchanged fumbles in the first possessions of the game. Brennan Sawyer recovered the Payson fumble at the Winslow five-yard line and drove 95 yards. Sawyer scored on a 34-yard pass from Junior Villanueva. The same two hooked up on a successful two point conversion for an 8-0 lead.

Noah Upchurch intercepted a pass and returned it to the Payson 24-yard line. The first quarter ended with the Bulldogs leading 8-0 and in the shadow of the Payson goal post.

On the third play of the second quarter Villanueva passed five yards to Sawyer for the touchdown. The conversion run failed and Winslow led 14-0.

Payson got back into the game with a 15-yard touchdown pass from Cline to Tim McCarthy to complete a time-consuming drive. The two-point conversion run was stopped and the Bulldogs still led 14-6.

Winslow mounted a drive near the end of the half but lost the ball on downs, allowing Payson to run out the clock and the half end with Winslow leading 14-6.

At the start of the second half, Winslow drove to the Payson goal line but lost the ball on downs just outside of the end zone. The Bulldogs got the ball back on a Payson fumble near midfield.

Winslow drove to near the Payson goal again but the drive ended with a Payson pass interception in the end zone by McCarthy. The third quarter ended with Winslow still leading 14-6.

The Longhorns drove and scored on a nine-yard run by Chris Johnson. The first two point conversion try was ruled a pass interference giving the Longhorns another try. Penalties against Payson moved the ball back but another interference penalty gave them a third chance. This time Cline passed to McCarthy to tie the game with about two minutes left to play and the score tied 14-14.

Payson’s Diandre Terry intercepted a Winslow pass and ran it back 90 yards to five yards from the end zone. Cline ran the final three yards to put Payson ahead 20-14 with less than a minute left to play.

The Longhorns held Winslow and ran out the clock for a 20-14 victory.

The Bulldogs will travel to Holbrook to meet the Roadrunners Oct. 20. Holbrook has had its own troubles this season but the Roadrunners are a major rival and can be dangerous when playing the Bulldogs. Holbrook is 2-6 following their 52-7 loss to a powerful Snowflake Lobos team.

The Bulldogs cannot afford another loss. They should make the playoffs with a victory Oct. 20.