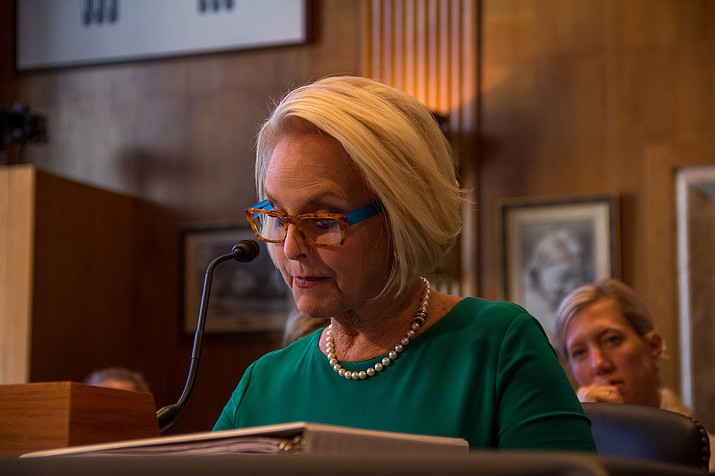 Cindy McCain, long active in the fight against human trafficking, told a Senate committee that miscommunication between federal agencies and authorities in Indian Country is “pretty much standard” when it comes to sex trafficking. Photo/Adrienne St. Clair, Cronkite News

WASHINGTON, D.C. — On Sept. 27, the U.S. Senate Committee on Indian Affairs held an oversight hearing entitled “The Government Reports on Human Trafficking of Native Americans in the United States.” The hearing focused on the critical needs within Indian Country and the need to garner support at the tribal and federal levels.

Cindy McCain, co-chair of the Arizona Human Trafficking Council, was invited to participate on a panel at the oversight hearing advocating for resources and proposed policy to combat human trafficking in Indian Country, and commended the Navajo Nation for being one of the first tribes in the nation to pass a law that addresses human trafficking.

“I am proud to say that the Navajo Nation, the largest tribal government in the United States, recently adopted their first anti-trafficking laws. It is a start for the Navajo and should be followed by tougher tribal enforcement and cooperation with federal agencies,” McCain said.

Council Delegate Nathaniel Brown (Chilchinbeto, Dennehotso, Kayenta), who also sits on the Arizona Human Trafficking Council and sponsored the human trafficking bill, said his efforts to initiate action against human and sex trafficking on the Navajo Nation began when he received information regarding the increase of Navajo trafficked victims.

“Human and sex trafficking are occurring on the Navajo Nation. Some of the ways that our children are being lured into the hands of traffickers is through the internet like social media — Facebook, Twitter, Backpage.com, and Craigslist. We also know that our own people are trafficking their own family members for alcohol, drugs and even for gambling money,” said Delegate Brown. “We are attempting to increase awareness to end trafficking on our Nation.”

Delegate Brown, a member of the Naabik’íyáti’ Committee’s Sexual Assault Prevention Subcommittee, said one of the effective ways to begin addressing human trafficking is training Navajo law enforcement, social service programs, Indian Health Service, and schools to educate the entities on human trafficking and how to look for signs to prevent women, children, and LGBTQ populations from becoming trafficking victims.

“This is everyone’s problem on the Navajo Nation and we need to educate ourselves to prevent our people from being taken and transported into the cities. Victims are beaten, traumatized and threatened, which forces them to keep this a secret from their loved ones for fear of retaliation. I encourage our Diné citizens to be on the lookout and report any suspicious trafficking activities to our law enforcement,” Brown said.