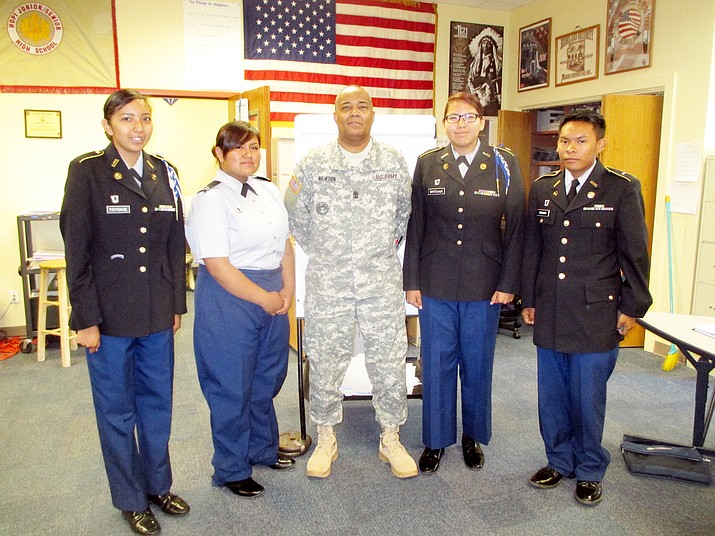 Hopi High junior ROTC Major James Cox was thrilled to get Newton on the staff.

“I’m glad to see him come on board because without him I would have been swamped,” Cox said. “His qualifications are exemplary.”

Cox said he is glad the cadets can see a sergeant and major working together in order to see how the military works. While both the major and the sergeant work with the cadets, Cox said officers are more like administrators while sergeants are more like teachers.

“The sergeants are closer to what needs to happen,” he said.

Newton said he came to Hopi High for two reasons: first, Hopi High was in need of an Army instructor that could make major contributions to the junior ROTC program; second, he wanted to experience the life of instructing junior ROTC on a Native American reservation.

“They’re true to their culture and welcome the teachings of education linked to the 21st century learner experience,” he said.

Newton said the staff at Hopi High School has been tremendously helpful since he came on board.

“Fellow teachers and administrators alike have acknowledged my arrival and came forth to offer any assistance that I may need to get situated into Hopi High,” he said.

Newton said his goals for the Hopi High junior ROTC program are the same goals he has at any school where he is employed.

“My priority is to have a successful program that sets and maintains the standards for any program to emulate. Another goal is to increase the awareness at Hopi High School junior ROTC program through the community,” he said.

Newton served 30 years in the Army.

“I have had countless duty stations here in the U.S. and have been overseas to beautiful countries such as Germany, France, Denmark and Egypt,” he said.

Newton said students benefit from junior ROTC by pursuing academic excellence, leadership development and social responsibility. He hopes to work with parents side by side as they prepare the cadets enrolled in junior ROTC for the real world after high school.

His last junior ROTC job was at a high school in California. He has not worked with Native Americans previously.

“I look forward to the journey and experience,” he said.

Newton said parents should know that he is passionate about junior ROTC.

“It’s not just a job,” he said. “It’s who I am. I am a Sgt. Major that brings many years of success in the Army and junior ROTC that genuinely cares about the cadets, the junior ROTC program, the school and the community that supports us.”