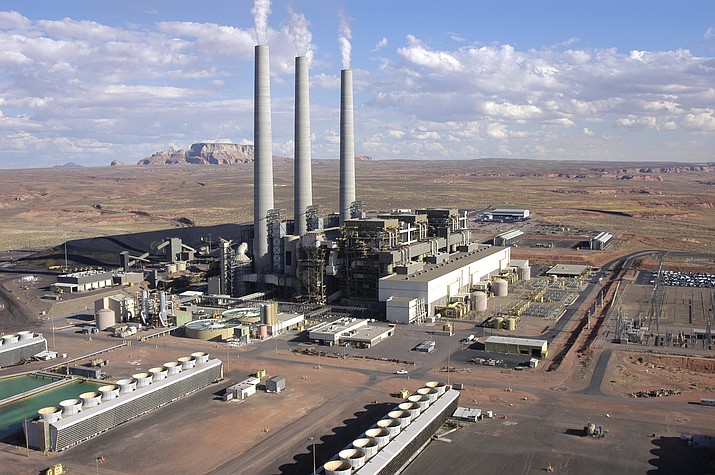 FLAGSTAFF, Ariz. (AP) — A coal mining company looking to save the Arizona power plant it feeds from closure says it’s making progress in the search for new owners. But few details came with a deadline Oct. 1 to identify potential buyers for the Navajo Generating Station near Page.

Peabody hired investment firm Lazard Freres & Co. LLC, to aid in the search. The task now is to narrow the field and work toward definitive agreements with interested buyers by the end of March, Sutton said.

It’s a tight timeframe. Contracts must be lined up for decommissioning well in advance. Lease negotiations with the Navajo Nation where the power plant is located and environmental reviews also could take years.

Environmentalists say another buyer for the power plant will keep the Navajo Nation locked to coal at a time when utilities increasingly are switching to other sources of power.

“We can’t assume this plant will support our economy for long, and it’s time we diversify our economy by building new clean energy projects that provide clean power, create jobs and bring new revenue to our community,” said Nicole Horseherder, of To Nizhoni Ani.

The owners of the Navajo Generating Station (NGS), including the Salt River Project (SRP), voted earlier this year to shutter the 2,250-megawatt plant because energy produced by natural gas was cheaper. The lease signed with the Navajo Nation still needs approval from the federal government and a former plant owner.

SRP spokesman Scott Harelson said Oct. 2 the utility received a letter from Navajo leaders acknowledging others’ interest in the plant and a commitment to move forward, but the information was little more than what the utility already knew.

Both Harelson and a spokeswoman for the Navajo Nation, Meghan Cox, declined to release the letter.

“It comes down to timing now,” Harelson said. “If they have serious proposals, they need to get those together and present them as soon as possible. The longer they wait, the more difficult it is.”

Navajo Nation President Russell Begaye said in a statement that the tribe is committed to engaging in negotiations with potential owners.

Hundreds of Navajos work at the plant and the associated mine near Kayenta. The Navajo and neighboring Hopi tribes rely heavily on revenue from coal operations.

What is the situation with the plant?

The plant was built in 1969 to power water delivery to the state’s desert region through a 336-mile canal system. The sole coal supplier is Peabody Energy’s Kayenta Mine, which ships the coal to the plant via rail line.

The plant became a steady supplier of electricity to Arizona, Nevada and California over the decades. But utilities increasingly are switching from coal to natural gas, which is cheaper and better for the environment, or renewables. As a result, the plant’s owners say financial considerations make it impossible to keep the location open, and they want to shut it down. The loss of the plant would kill the coal mine, where hundreds of tribal members work.

Who is looking for new owners?

Interior Secretary Ryan Zinke says long-term operation of the plant is among the department’s top priorities.

The U.S. Bureau of Reclamation owns a portion of the power generated from the plant and says it has to look out for the best interests of tribal governments. It is keeping the players talking about potential new ownership, cost-reduction at the power plant and mine, and new power buyers.

But the customer base is dwindling. California cut out power from coal, and Nevada is doing the same. The largest user of power from the Navajo Generating Station, the Central Arizona Project, is in favor of ditching coal, too. Officials say they could have saved $38.5 million last year by buying power on the open market.

Peabody argues that coal is more stable than natural gas and it would offer a reduced price for it.

Who are the potential new owners?

No one will say. Prospective owners have signed confidentiality agreements. SRP gives them access to information on the plant, past performance, maintenance schedules and cost, existing lease agreements, the coal supply from Peabody Energy’s Kayenta Mine, staffing and union contracts through a virtual data room.

SRP spokesman Scott Harelson says the utility has 14 signed non-disclosure agreements but it doesn’t know the level of interest.

Peabody spokeswoman Beth Sutton wouldn’t say whether any serious contenders have been found, only that the company is pleased with the caliber of firms interested in the process.

What is the value of the plant?

Construction of the plant cost $650 million, according to SRP. Another $465 million went to pollution controls in later years. Harelson said the value now depends on how much money could be made running the plant.

The owners don’t expect to make a huge profit if it sells.

Operations and maintenance costs totaled $204 million in 2016. Environmental regulations also would factor in to future costs. The plant owners committed to shutting down one of the three units by 2020 to cut haze-causing nitrogen oxide emissions and install pollution controls on the other two units by 2030.

What’s in it for tribes?

The Hopi Tribe’s interest is in coal royalties that make up 80 percent of its budget. Few of its members work at the power plant or mine.

Hundreds of jobs for Navajos and 30 percent of the tribe’s budget would be lost if the plant and mine close. A new owner would have to negotiate a lease with Navajo.

Meghan Cox, a spokeswoman for Navajo President Russell Begaye, said the tribe is hopeful for ownership proposals and looks forward to reviewing them.

Percy Deal, a Navajo who lives south of the coal mine, says the Navajo Nation should stop wasting time thinking a new owner will come aboard. He said the economics don’t support keeping a coal plant open.