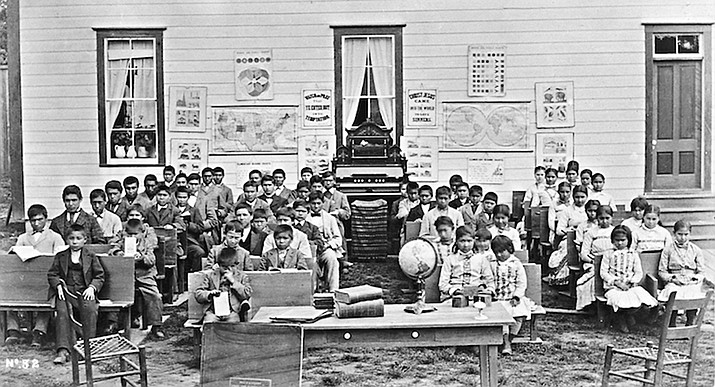 Native leaders are putting out a call to everyone in Indian country, they’re requesting information about children who never returned home and were never accounted for after being sent to residential boarding schools in the United States.

The leaders want to gather those details and then compel the U.S. government to release its records about all the schools and the children, including the missing children, to their descendants.

The groups, through the UNWGEID, will call on the United States to “provide a full accounting of American Indian and Alaskan Native children who were taken into government custody under U.S. Boarding School Policy and whose fate and whereabouts remain unknown” according to the groups’ press statement.

“The U.S. government has never accepted responsibility for the intergenerational impacts of its Indian boarding school policy that removed thousands of indigenous children from their families and communities from 1869 to as recent as the 1980s for the stated purpose of forced assimilation. The U.S. has also failed to provide information about the number of children that died in government custody under this policy, nor has it provided evidence that families or tribes were consistently informed when their children passed away or went missing despite attempts to obtain this information through Freedom of Information Act requests filed by the National Native American Boarding School Healing Coalition, the Native American Rights Fund (NARF) and the International Indian Treaty Council (IITC),” according to the press release.

“NABS, IITC, NARF, and NCAI respectfully request that families and tribes gather testimony and share information, where appropriate, for the UN filing.”

Each of the groups had filed Freedom of Information requests, according to Christine McCleave (Turtle Mountain Ojibwe) Executive Officer of the National Native American Boarding School Coalition, which filed a FOIA request in February of 2016.

In their official petition the NABS requested the following: the number of boarding schools established for Native American students between 1819 and 1972 supported by federal funding and/or policy; the amount of funding that was provided by the federal government for the operation of these boarding schools and the identity of each school, church, mission or other recipient receiving the funds; the location of each school, the number of students for each year of operation, and the identity of each student taken to these schools including their tribal (including Pueblo, Alaskan village) affiliation; and, the fate of each student including whether they returned home, moved to another setting such as further schooling, or were deceased and interred at the school or another graveyard.

McCleave noted that the NABS has been in correspondence with the office of the Bureau of Indian Affairs but has not received any of the requested records.

In the last decade there have been discoveries of unmarked graves in various boarding schools throughout the United States. In 2015, researcher Marsha Small found several unmarked graves in the Chemawa Indian School cemetery in Oregon after surveying the area with ground-penetrating radar.

Historian and Carlisle Indian Industrial School expert Barbara Landis noted that unmarked graves and missing students are issues at that facility as well.

“Out of the 14 unknown stones, we’ve uncovered the names of all but two. The U.S. government is working on getting records from the Cumberland County Historical Society and the Dickinson College digitization project on line.”

The total number of missing children in the U.S. has not been established, however one Native scholar, Preston McBride, has estimated that the number could be more than 10,000.

McCleave said that NABS has not yet gathered all the data either.

“We have a few leads, but are still in the process of collecting official testimonies. We do know children went missing because the Canadian Truth and Reconciliation Commission found the names of over 6,000 children who died or went missing while at Residential Schools,” McCleave said.

“There is also gathering evidence of unmarked graves at boarding school cemeteries in the U.S.,” she added.

In their FOIA request from 2016, the NABS had estimated that there could have been “as many as 500 schools for Native American children.”

The NABS and collaborating institutions hope to gather as many testimonies about missing children by early August for the September UNWEIGD meeting in Geneva, Switzerland, but they may extend the deadline if “we feel we need more time to gather testimony” said McCleave.

“Please help us reach out to families and relatives who may have specific information or testimonies they are willing to share about family and tribal members who attended boarding schools, but remain unaccounted for or are still missing,” she said.