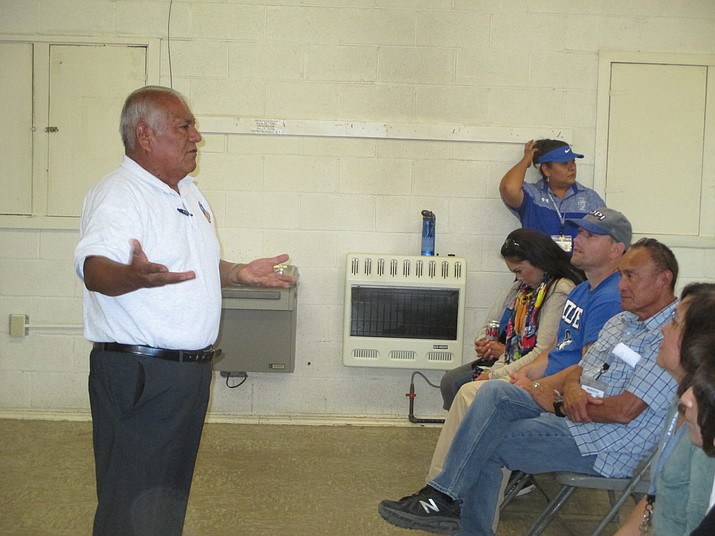 The staff at Hopi Jr/Sr High School also viewed the documentary “Words of the Ancients” earlier that day.

Blue Jirak, an English teacher at Hopi High School, said he was surprised by the experience.

“I was even more surprised that this experience would change the way I view the world,” he said. “I learned something that I had known, but couldn’t learn — one cannot understand another culture through the distorted lens of one’s own culture. One must somehow glimpse through the eyes of that culture.”

Jirak said before this visit, he was ignorant about the reasons why the Hopi came to this area, why they chose to remain here for thousands of years and why the ceremonies are so important. He said the words of Ivan Sidney and Dixon Silas (from First Mesa) allowed him to understand that he didn’t have a clue about the Hopi.

“I realized that I had a terrible misconception of Hopi because of my own distorted, cultural lens,” he said. “I was permitted to see the beauty and universal importance of the spirituality that is the center of Hopi.”

Jirak said he also came to understand that many of his opinions about how Hopi High School should be managed were completely wrong.

“My opinions were wrong because I was not viewing formal education through the eyes of the Hopi,” he said.

Jirak said spirituality is at the center of Hopi.

“It is that spirituality, that faith, that I really respect,” he said. “It was humbling to realize that an entire culture, for thousands of years, was based on this incredible faith. That faith is something that breaks through all cultural borders and speaks to my human heart. It is good. If someone would ask me today, I would now define Hopi as good.”

Jirak said he now understands why some Hopi say formal education must come second to the traditional cultural education.

Edgewater said Jirak’s response was exactly what she was looking for the staff to understand.

“It’s a lifetime transformation that cannot be explained,” she said. “It was a changing moment for the staff at Hopi High School.”

Edgewater said it was a moment of purpose to understand why the Hopi administration does everything the way they do it at Hopi Jr./Sr. High School.

Ivan Sidney, president of the HJSHS Governing Board and an administrator at First Mesa, greeted the teachers and staff when they arrived at Ponsi Hall.

“We were honored to have the staff here,” he said.

Sidney said it was important to have the staff, especially the non-Hopis, understand the Hopi history in order to understand “who we are.” He said cross cultural learning is needed for the students.

Sidney said he hopes the staff at HJSHS will visit the other villages.

“They can see why Hopis are humble. We were here first, and we know who we are,” he said.

Sidney said this can enhance the learning of the students. He wants to see more Native American studies at HJSHS.

“Some historians could be part of the teachings,” he said. “Our children need to know our history, how we got here and our mission.”

Sidney said the gathering will help the non-Hopis understand the dos and don’ts.

Betsy Dobias, a computer teacher at HJSHS, said the trip to Walpi was a valuable experience to the educators that work on the Hopi Reservation.

“It was very enlightening,” she said.