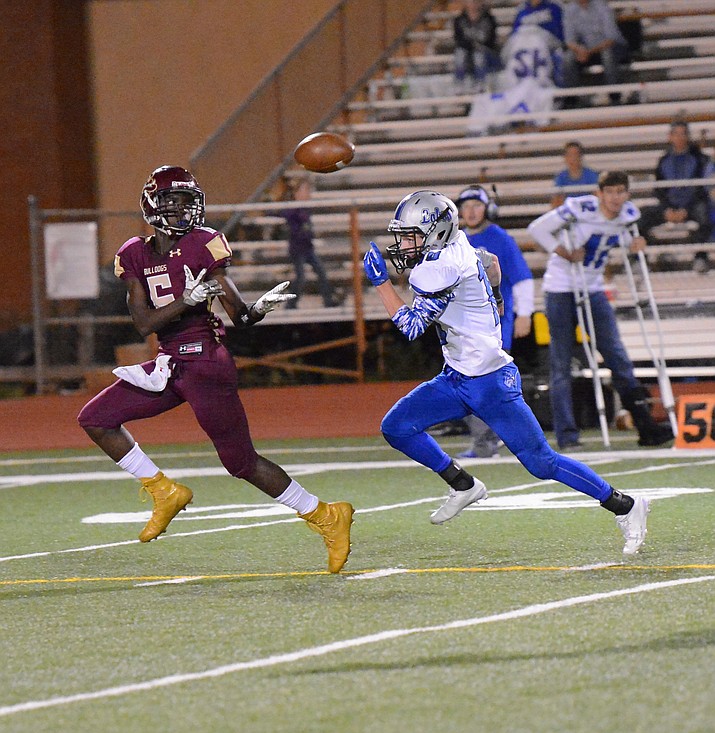 One of Yoann Djass’s multiple receptions in the Sept. 22 game against the Snowflake Lobos. The Lobos beat the Bulldogs 54-28. The loss was the Bulldog’s first, bringing Winslow’s record to 5-1. Photos/Todd Roth 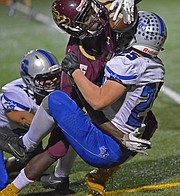 Yoann Djassa is stopped at the one-yard line by the Lobos, setting up a score in the Winslow Bulldogs loss to the Snowflake Lobos Sept. 22. Photos/Todd Roth

WINSLOW, Ariz. — The Snowflake Lobos defeated the Winslow Bulldogs 54-28 Sept. 29 in Winslow, improving the Lobos record to 4-2 and dropping Winslow’s to 5-1.

The Lobos used a powerful running attack in what was their most important win of the season.

The loss was Winslow’s first of the season, though the Bulldogs look like a playoff team and could still secure a home playoff game.

Snowflake was struggling some this season coming into the game with a 3-2 record. The Lobos did not play Sept. 22. The Lobos defeated Tuba City 49-6 and Chinle 55-6, but lost to Kirkland Central from New Mexico 21-14 and Thatcher 27-6. The Lobos won their last game 13-10 over Safford. Snowflake has traditionally been a tough opponent for the Bulldogs.

Winslow had an early touchdown negated on a holding call, a 60-yard pass from Junior Villanueva to Yoaan Djassa was erased on the penalty. Snowflake held and drove into Winslow territory.

The Lobos drove 84 yards and scored on a nine-yard run by Tyler Brimhall. The conversion run failed and Snowflake led 6-0 with a little over half of the first quarter gone.

Winslow scored on the first play after the kickoff on a 72-yard pass from Villanueva to Djassa. Villanueva ran for the two point conversion that gave the Bulldogs an 8-6 lead.

Snowflake drove and scored on a 19-yard run by Jace Merrel. The conversion kick failed again but the Lobos had regained the lead 12-8 with four minutes left in the quarter.

The Bulldogs scored on a 10-yard pass from Villanueva to Jalen Lyons. He then hit Brennan Sawyer for the two point conversion. Seconds later the first quarter ended with Winslow leading 16-12.

The first half ended with Winslow leading 16-12.


Snowflake drove on their first possession of the second half and Brimhall scored on a 10-yard run. He then ran for the two point conversion that gave the Lobos a 20-16 lead.

The Lobos managed to stop the would-be Winslow punter and took the ball on downs at the Winslow 15 yard line. A couple of plays later, the Lobos scored on a seven-yard run by Jake Christensen. The conversion run failed and Snowflake led 26-16.

Winslow quickly came back to score on a 76-yard pass from Villanueva to Djassa. The conversion failed and Snowflake led 26-22 half way through the third quarter.

Winslow got a fumble recovery near midfield, the first turnover of the night for Snowflake. The third quarter ended with Snowflake still leading 26-22, after forcing Winslow to punt.

Winslow got its second fumble recovery on the Snowflake 31-yard line. Leeander Keams recovered the fumble. Winslow had another touchdown negated by a penalty for an ineligible receiver down field erasing a touchdown throw from Villanueva to Sawyer. Villanueva ran five yards for the touchdown that gave Winslow a 28-26 lead after the conversion run failed.

Snowflake drove 69 yards for the touchdown that gave them a 34-28 lead. Traegon Standerfer ran 20 yards for the score then ran for the two point conversion.

Another fumble by the Winslow punter gave Snowflake the ball on the Winslow nine-yard line. The Bulldogs took the ball on downs at the 12-yard line after some strange calls against both teams. There were still over three minutes left in the game.

Snowflake recovered a Winslow fumble and Snowflake scored on a seven-yard run by Brimhall. The two point conversion run increased the Snowflake lead to 42-28.

Snowflake recovered a Winslow fumble, which Brimhall picked up and 48 ran yards for the touchdown. The conversion failed and Snowflake led 48-28.

Snowflake’s Davis Kay picked up a Winslow fumble and ran 44 yards for the touchdown. The conversion kick failed and Snowflake led 54-28 with less than a minute left in the game.

The Bulldogs were without two injured linebackers, who were thought to be one of the reasons for the success of the Snowflake running game.

The Bulldogs will journey to Lakeside Oct. 6 to meet the Blue Ridge Yellowjackets. The Yellowjackets have not been the formidable team they were for years, but have an interesting record.