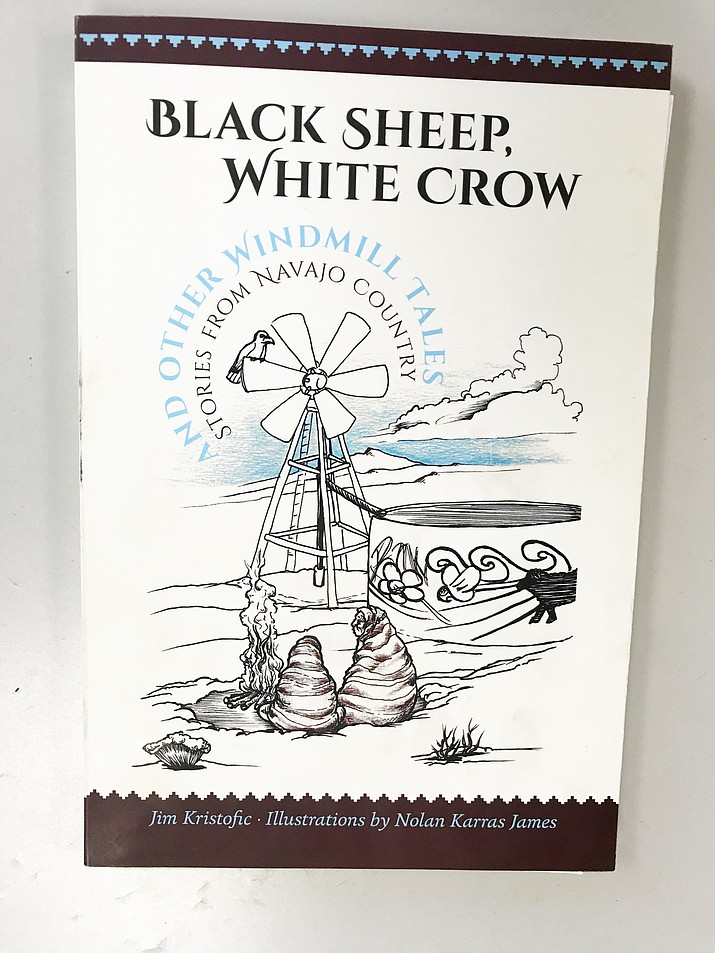 Known for his Native books The Hero Twins: A Navajo-English Story of the Monster Slayers and Navajos Wear Nikes: A Reservation Life, Kristofic said his inspiration for this book came to him after an invitation to do a writing seminar with a Bureau of Indian Eductaion (BIE) class in Kaibeto.

The students in Kaibeto had read Navajos Wear Nikes and really liked it, Kristofic said.

It also helped that Kristofic had ties to Kaibeto — he was friends with a local school official who also served on the school board at the school and who also owned the local trading post.

“I went out to Kaibeto and it was a great time. I didn’t really know what I was going to do because I hadn’t done a writing seminar before — I teach creative writing, so I decided I’d just do what I normally do in creative writing classes,” he said.

It was during this creation period that Krtistofic and his students came up with one of the premises for one tale in Black Sheep, White Crow — The Ring with Three Stones.

“These students identified with certain modern things and made them their own in a very short amount of time,” he said.

Kristofic wondered about incorporating other story concepts already in place — based on personal experiences from growing up on the reservation and from stories told to him. He said he re-envisioned them into a book rather than an oral storytelling.

Additionally, Kristofic said he thought about the book being from his perspective of traditional Navajo stories told to him as a boy.

“What would it look like if I took those understanding and I applied them to story motifs that are already out there — what would happen with that interaction?’ he asked. “It reminds me of how Navajo people historically have always taken in outside concepts and made them work for them. They left out what didn’t work and incorporated what did.”

Kristofic said this idea reminded him of how Diné people and artists embrace new motifs, working them through traditional mediums.

Kristofic said it is a weaving of different ways to tell and interpret a story.

Set in the 1990s, each tale is told to Kameron, a young boy living on the Navajo Reservation after he moves to his grandma’s sheep camp, he leaves behind his cell phone reception and his friends. The young boy’s world becomes even stranger when Kameron takes the sheep out to the local windmill and meets an old storyteller. As the seasons turn, the old man weaves eight tales that teach the deeper story of the Diné country and its people.

Kristofic has worked on and off the Navajo Reservation for more than 10 years as a river guide, ranch hand, journalist, park ranger, and oral historian. He currently teaches in northern New Mexico.

Black Sheep, White Crow and Other Windmill Tales: Stories from Navajo Country is 120 pages and is illustrated by Nolan Karras James. Nolan Karras James is an artist, songwriter, powwow dancer, guitarist, and former rodeo cowboy from Pinon, Arizona. His father is Many Goats Clan and his mother is Apache.

Black Sheep, White Crow and Other Windmill Tales: Stories from Navajo Country is available for $19.95 from the University of New Mexico Press at unmpress.com and is available through Amazon, among other book sellers.