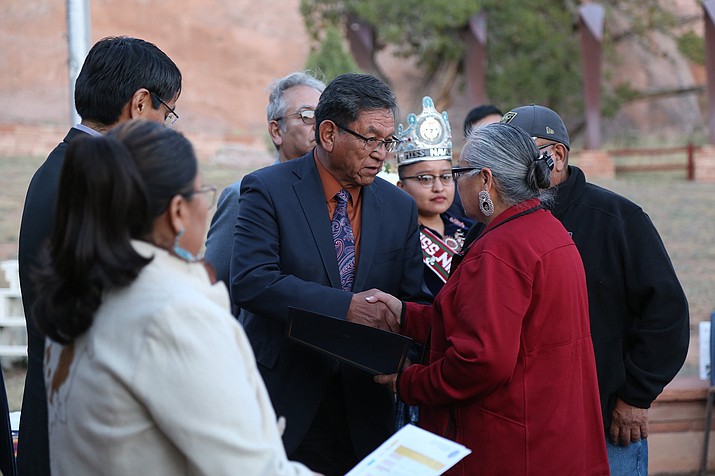 “Our warriors will never be forgotten,” Begaye said. “We honor their memory and the countless sacrifices made by our Gold Star Mothers and Families. Thank you for all that you have done and for your presence here today.”

“It is important not only to honor our soldiers but also our parents. The respect begins at home and continues even after loved ones have passed,” Nez said.

“Whether it’s mom or a family member, you served right alongside our warriors,” Nez continued. “We must never forget the sacrifices they and their families made.”

The ceremony was held at the Window Rock Veteran’s Memorial Park and is the second recognition event on the Navajo Nation. Before, Gold Star Mothers and Families would have to travel off the Navajo Nation to participate in events to honor their children who lost their lives in military service.

“Events like this, for myself, my husband and my family, are comforting. When we all come together, we console each other and we really enjoy being with one another,” said Gold Star Mother Jeanette Yazzie.

Yazzie, along with other mothers, reached out to the Navajo-Hopi Honor Riders and asked for assistance to bring this event to the Navajo Nation.

The Navajo-Hopi Honor Riders organization was formed after the death of Lori Piestewa, the first Native American woman to die in combat on foreign soil during Operation Iraqi Freedom. The group supports soldiers by welcoming veterans home, assisting with funeral escorts and organizing the annual Navajo-Hopi Honor Run to visit veterans and their families, which had its 15th anniversary earlier this year in May.

“We asked: why can’t we hold one [a Gold Star Mother’s and Family’s ceremony] and honor our heroes here at the Navajo Nation’s capital?” said Michelle West, secretary for Navajo-Hopi Honor Riders. “So we decided to collaborate with the Office of the President and Vice President and see what we could do.”

“It is important to have these events in Indian Country,” said Jamescita M. Peshlakai, Arizona Senator and executive staff assistant OPVP. “We have to observe the sacrifice and honor the lives of these young men and women that passed on in service to this country, and of their families.”

Begaye said that while this is the second year, the Navajo Nation will continue to hold these ceremonies.