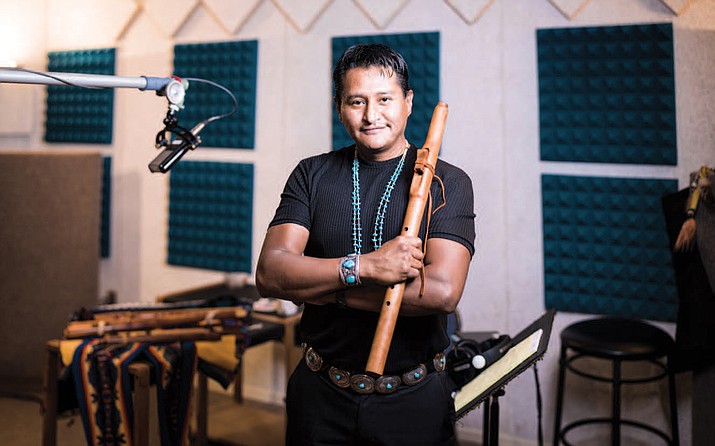 Jonah Littlesunday takes a short break while recording an album for Canyon Records in 2015.

Flagstaff artist Gabe Yaiva was nominated for his full length album, Vision, for Best Rap/Hip Hop/R&B recording. The album features 17 songs as a modern day voice of the ancient.

Yaiva is Navajo and Hopi and grew up on the Navajo and Hopi reservations. He is the Tribal Relations Officer for Health Choice Integrated Care. Yaiva is the husband, father, brother and son of the Reed Arrowhead Clan of Navajo and the Hopi Eagle Clan.

Yaiva is the founder and owner of 4th World Entertainment and Native World Enterprise, an independent label that has released 14 nationally selling albums and produced over 30 events that showcase Native talent in the Southwest.

“I am excited and honored to be nominated,” Yaiva said. “The newest album, I feel, is the best to this point of the dozens of albums and mix tapes we’ve produced over the year.”

Yaiva said that he appreciated the support and continued love of the fans, family and supporters. The album is available on iTunes, Amazon Music, Spotify, etc.

“We have amazing features also, aside from the solo tracks,” he said. “We are honored that Drezus, SupaMan, Project X, Orion, TrainCity, Krook, DJ Soe and many others contributed to the completion of this album.”

He said he was taught when people leave Earth, their spirits go to one of the six sacred mountains. Yaiva said he visited Mt. Blanca with his wife and kids last summer to visit the waterfalls.

“As I started to walk up the mountain, I could feel my mother’s presence there so strong. I started to cry and spoke with her, told her I missed her and that her kids and grandchildren are all doing ok,” Yaiva said. “My mother went home in June of 2014. I had been working on this album for several years and when I would leave the studio, I would go see her, she would ask how it was coming.”

Yaiva said his mom kept clips and copies of everything he has done with music and movie soundtracks. After she passed, Yaiva said it took some time before he did anything with music.

But after he went to Mt. Blanca, he felt her there and felt he needed to finish his album, Vision, which he did in February of 2017.

“The picture of Mt. Blanca is to let my mom know I completed the album and to let the listeners see the beautiful place my mother now lives at,” Yaiva said. “When I got the shipment in March, I opened the boxes and took the first copy out and sent it aside for her. I hope she is proud of the work we put into this album and how she is the biggest part of this project.”

Jonah Littlesunday, who used to live in Flagstaff but lives in Phoenix now, was nominated for his album of flute music, Gratitude. He is nominated in three categories, Flutist of the Year, Best Male Artist and Record of the Year for “One World Many Voices” with various artists (Ed Lee Natay, R. Carlos Nakai, Xavier Quijas Yxayotl, Earl Ray, Aaron White and Jonah Littlesunday)

He said that hearing about the nominations was unexpected. It was his understanding that submissions go through an advisory panel and that panel votes on who gets nominated.

“It’s like a huge thing,” Littlesunday said. “I guess there are a lot [of submissions].”

Littlesunday said that as a new artist, the buildup has been slow and challenging. With a living situation that was uncertain, there were many times that he and his family did not know how they would get food to eat or get things done.

In that period last year, Littlesunday said he performed in a lot of free shows, some at the Phoenix Children’s Hospital, the Arizona State Veterans Home and afterschool programs.

“It kept us busy while the album came out,” Littlesunday said. “We’ve just been taking it step by step. I wish it was a fairytale kind of thing, but there’s a lot of hard work.”

Being away from his family was one reason Littlesunday did not want to record before but now they are together.

“Now we’re together and it makes everything a lot easier,” Littlesunday said.

Littlesunday’s wife, Pauline, is his manager, which also enables the family to stay together more.

Littlesunday said the only problem with the nomination is not being able to get to New York to perform and be there in person. But that is not possible for Littlesunday and his family because of the cost.

“It’s not realistic,” he said. “I had dreams of doing a benefit concert to raise funds and I was invited to perform, but reality, it’s not possible.”

Will Clipman, a Native American percussionist, poet and performance artist, heard some of Littlesunday’s flute music and loved it.

He and 2016 Best Male Vocalist of the Year Roman Arona invited Littlesunday to join their group and formed a new group called Medicine Arrow.

“Everything came out really great,” Littlesunday said, adding the group has recorded some songs at King Record Studios. “Roman Arona is Apache and he can sing. Will Clipman is a great percussionist and he does all kinds of instruments. I was like, ‘I can’t believe this is happening to me.’ With the nomination and everything, I’m really excited.”

According to NAMA’s website, the show celebrates the rich, cultural heritage of the nation’s first people and promotes cultural preservation and renewal on a national level through new music initiatives.

“We aim to raise the awareness level and appreciation of Native American culture to the public at large, both nationally and internationally,” the website said.

According to its website, NAMA began in 1998 as a grassroots initiative to prove there was a viable Native American music industry. The initial awards show launched with 56 annual recordings. Today, the awards show receives over 200 national recordings. It is an all-volunteer organization.

“Without NAMA there would be no recognition of Indian music… on a national and professional level,” NAMA’s website said. “The artists and their record companies enter their music recordings to receive greater exposure and awareness. After over a decade and a half, we have broken new ground with an ever expanding international audience.”

Native American music can span many genres such as rock, pop, blues, hip hop, country and new age as well as some that is more distinct like Native American church music or Waila.

The show was inspired by the Black Elk prophecy and a band from the Rosebud Reservation called 7th Generation. Its founder, Ellen Bello, was a mainstream music industry executive with over 20 years of experience and one who was previously involved with the MTV Music Video Awards, New York Music Awards, SPIN Magazine and more.

The awards show consists of 30 awards including Lifetime Achievement and Hall of Fame. The show also features performances from Native American artists.

To be nominated, artist’s recordings must have been released in the previous calendar year. Nominees are selected by NAMA’s national advisory membership, which consists of people directly involved in recording, manufacturing, distributing and promoting Native American music nationally, according to NAMA.

Winners are chosen by a combined vote of the national advisory membership and the general public, who can listen and vote for the tracks of the nominees at www.nativeamericanmusicawards.com/home.