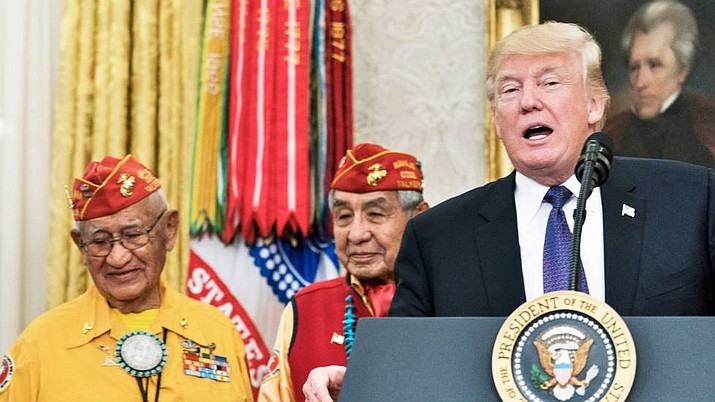 “First and foremost, we appreciate the honor and recognition that has been bestowed upon the Navajo Code Talkers, who truly are National Treasures and protectors of freedom,” said Navajo Nation President Russell Begaye.

The reference to Sen. Warren as Pocahontas is a part of an ongoing feud between the senator and Trump over statements Warren made about having Native American heritage during her Senate campaign.

“In this day and age, all tribal nations still battle insensitive references to our people,” Begaye said. “The prejudice that Native American people face is an unfortunate historical legacy. As Native Americans, we are proud people who have taken care of this land long before there was the United States of America and we will continue to fight for this Nation.”

Begaye said the Navajo Nation does not want to engage in this dialogue between Warren and Trump.

The purpose of the day’s event was to honor all Native American Code Talkers who used their Native languages to encode sensitive messages and protect U.S. wartime communications in both World Wars I and II.

“It was our Code Talkers that ensured the freedom of the United States and that’s what is important to remember here,” Begaye said.