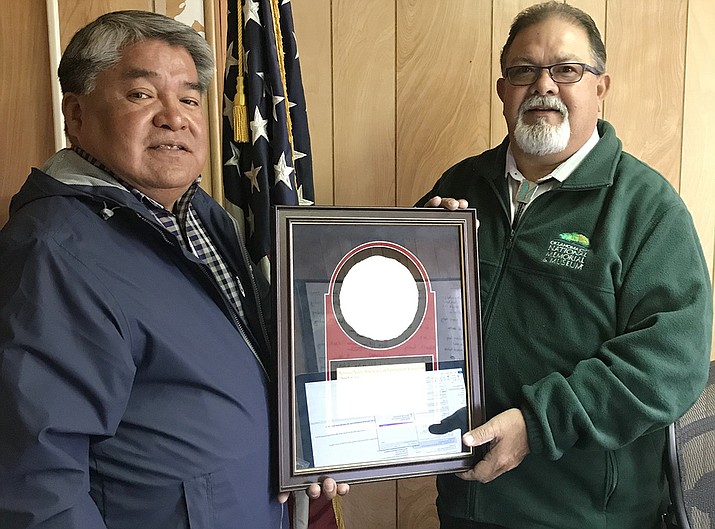 Delmar was honored to receive the recognition on behalf of the Navajo Nation.

“This award is something that I am personally grateful for. It’s national recognition that I wasn’t expecting,” he said.

The NNALEA presents the award annually to a public safety director who they believe has made positive strides in their communities. NNALEA President Tom Woolworth said Delmar’s selection for the award was unanimous on behalf of the NNALEA Executive Board.

“We have known Delmar for many years, throughout his many capacities in law enforcement,” Woolworth said. “This award is well deserved as exemplified by his leadership and contribution to law enforcement in Indian Country.”

“Director Delmar has done a great job supporting our officers in providing oversight to the NNDPS. He’s been able to successfully hire a police chief to the Navajo Nation Police Department, which is a position that had been vacant for nearly eight years,” said Navajo Nation President Russell Begaye.

In considering recipients for the award, the NNALEA looked at public safety directors from across Native America.

“I accept this honor on behalf of the NNDPS and the Navajo Nation,” Delmar said. “I would like to thank the NNALEA for this recognition as it is something I will cherish and share with my staff.”

Delmar has served as executive director for NNDPS since May 27, 2015 when he was appointed by Begaye. He was confirmed by the 23rd Navajo Nation Council on July 23, 2015.