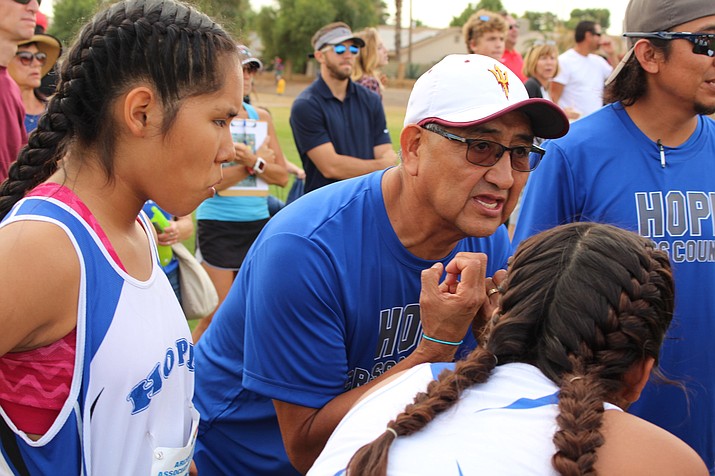 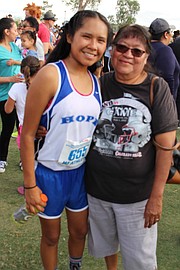 Hopi High Coach Rick Baker said the Lady Bruins surprised with a strong race because one week before the race one of their runners was kicked off the team for violating a team rule. This left the Hopi High girls with six runners instead of seven.

“It was scary not knowing how the girls would respond to the situation,” he said. “It was a surprisingly good day for the girls program.”

“We would have liked the fifth girl to have been closer, but that’s how the chips fell. I told the girls to be happy, but not satisfied,” he said.

Before the race, Coach Baker told the girls to leave everything on the track.

“I didn’t want to hear any should-haves. They all knew their jobs and gave it their best shot,” he said. “I’m happy for them. The boys kind of overshadowed their success. Only two teams get a trophy and I’m glad we got one of them.”

“You train on your own and you train during team get togethers. That’s what good teams do,” he said.

Honani, a junior, said she was happy about placing second and taking home a team trophy. She said the team ran to their potential.

“Before the race we were emotional so maybe we ran off some anger,” she said.

Honani said the Lady Bruins ran to their potential because it was the state meet and they went all out. She was running on a rolled ankle which she dealt with all season — she just taped it, wore ankle protection and did ankle strength exercises. She said Hopi’s top four runners ran well. She hopes to get a cross country scholarship to attend the University of Arizona to major in engineering or the sciences.

Huma said she was not satisfied with second because they could have finished first.

“But it’s still good because it’s better than nothing and we took home a trophy,” she said. “We tried to run to our potential because there were only six of us and we had to make it count.”

Huma was also proud of running to her potential because she finished in the top 20 so she won her first state medal. She had a leg injury earlier in the season, but overcame the problem. She said passing the finish line was fun.

Joseph, a sophomore, said winning second place was exciting because the team came so far this season despite all their mistakes.

“We brought home a trophy, so I felt good, but not satisfied,” she said.

Joseph said the weather was just right and she enjoyed running the hills because “it burns your legs.”

“We all wanted it. We need leaders to ask the fourth and fifth runners next year how bad they want it,” she said.

Joseph said she thought she ran to her potential, but she was disappointed she didn’t finish in the top ten.

“It felt good to get a medal, but last year I finished 13th. I need to push harder,” she said. “We need to find a leader who will get our fourth and fifth runners to close the gap.

Honwytewa, a junior, said finishing second was good, but not what they wanted. She said the Lady Bruins ran to their potential considering they were short a runner.

“We need a full team to accomplish our goals,” she said.

Honwytewa said the girls need to run all year in order to compete at state.

“We need to run from here to Winslow to watch the train go by,” she joked.

“We were not third. It’s better than getting lower than second and it’s closer to first,” she said.

Casuse said Hopi High ran to their potential because “we all wanted it really bad.” She felt she ran a good race.

“I liked running the second mile because that’s when you’re out in no man’s land and there’s nobody else around,” she said.

“Latifah made us proud because she tried hard all season,” she said. “She ran during the summer and all year like we’re supposed to do.”

Casuse wants a cross country scholarship, but she doesn’t know where she wants to go to college. She wants to major in architecture or entrepreneurship.

Secakuku, a sophomore, said winning second felt good because they were able to do well despite only having six girls. She said Hopi High ran a good race.

“We pushed ourselves to take second,” she said.

Secakuku felt she ran to her potential, but was upset with the player who broke team rules.

“I was mad about it because if she was there we could have won,” she said.

Secakuku said the key to preparing for next year is running year round and managing her time so she has time to run.

Secakuku hopes for a cross country scholarship to college. She plans to attend Ft. Lewis College to major in nursing.