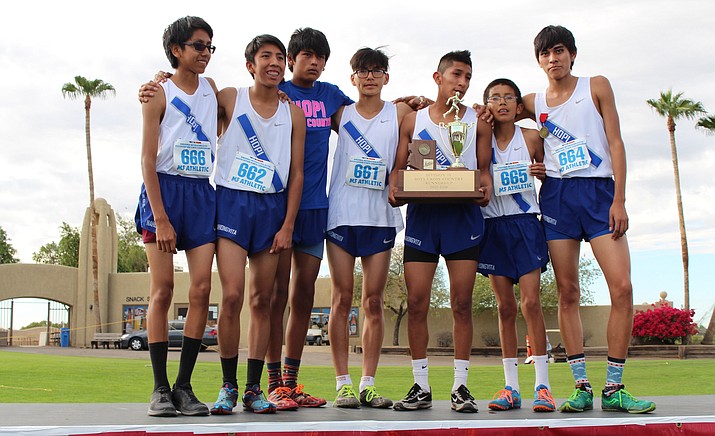 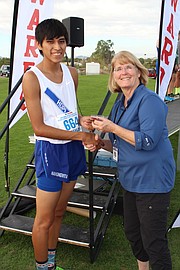 Northland Prep Coach Missy Acker said she was incredibly excited about her team winning state and beating Hopi because her runners had worked hard.

“Hopi had an amazing dynasty, but we were able to beat them,” she said. “It took five minutes for me to believe that we beat them. I really admire Hopi. Beating them is wonderful in some ways, but it is such a great program that it’s kind of sad.”

Northland Prep won the race by 11 points finishing with 57 points while Hopi was close with 68 points. There were 27 teams in the boys race. The teams rounding out the top five found Alchesay, third, 149 points; Many Farms, fourth, 160 points; and Chandler Prep, fifth, 190 points.

Hopi High Coach Rick Baker said the boys were so emotional after the race that it was hard for him to keep his composure.

“We have a high standard and we’re not used to coming in second. We’ve never been in this position before. I’ve never prepared a losing speech,” he said. “First, I let them go to their families for support, then we had our team meeting. It’s hard to see the streak broken. But next year we’ll start another tradition.”

Baker said it’s easy to get to the top, but it’s hard to stay there.

“Now the coaching staff gets to breathe. We’ll go back to the drawing board and see what we’re made of,” he said. “We ran the best we could for the day, but the other team ran better.”

Baker said he told the runners coming in that in order to win they had to run five spots better than they had run this year. He said Pashano did that, but the others ran the same.

“There’s nobody to blame. They all ran the best they could,” he said. “I couldn’t ask for anything more from the kids.”

All of his boys were academically eligible and there were no major injuries. He said the weather had no impact on the race, but some of his runners said it was too hot. Baker said Northland Prep ran some practices in Sedona to get acclimated to the heat.

“We don’t have that luxury,” he said.

Baker said he appreciated fan Leonard Talaswaima’s words when he told the boys that running is about more than winning medals.

“We run for the people and we run for strength. I’m glad we all finished,” Baker said. “I feel for Trey because he’s a senior, but he won a state title. Now we need to win state titles for the new guys.”

“Like I told the girls, be glad you got a trophy. Let’s use this as motivation for next year and do better with our training. Be happy, but not satisfied,” he said. “I want to thank the fans because they felt the shock and sting too. The fans were supportive and respectful; they patted the kids on the back. This was tough on the kids and coaches. I thank everyone for giving me the space to talk to the kids. I didn’t know how to act, but my hat goes off to NPA because they got their target.”

Nodman, a junior, said he felt pretty good about finishing second because that’s better than he finished the last two years. He placed seventh last year. He was disappointed that the Bruins placed second.

“I was disappointed that I didn’t push the others. I know they can do better from all the races they ran this year,” he said.

Nodman said the nerves about trying to keep the streak going got to some of the runners.

“We were overthinking because of the pressure put on us each year. There’s a lot of pressure and it took its toll,” he said. “I could have pushed myself harder. I was just overwhelmed because I kept looking back to see where my teammates were.”

Nodman said he ran with some soreness in his right knee. He said the weather was warmer than last year. He said Talahaftewa ran a good race for Hopi. He said in order to win next year that the runners need to run track and run during the summer.

Nodman hopes for a cross country scholarship to either USC or Oregon where he would major in psychology. He also wants to challenge more runners to come out for the squad next year.

“Some don’t want to challenge themselves, but we need a stronger team for future years. Those who want the challenge should come out,” he said.

Laban, a junior, said placing second was hard for the boys to take in.

“We couldn’t believe it. We didn’t want to believe it,” he said.

Laban said some of the Hopi boys ran to their potential and some didn’t. He said he thinks he ran to his potential, yet he was thinking that he could have run better. Last year, he placed 17th, but this year he showed improvement by moving up to 13th. He said the weather may have impacted him a bit because he felt the heat. He said Pashano ran a good race for Hopi. Laban hopes to land a cross country scholarship to the University of Arizona where he may major in behavioral psychology.

Baker, a junior and the coach’s son, said coming in second was hard because of the pressure to keep the streak alive.

“We gave it our all, but NPA outran us and they were more prepared,” he said.

Baker felt that he ran a good race as he improved from 20th last year to 14th this year. He also said the heat got to him.

“The start was the best because I was with the top five, but then I faded back. I should have stayed up there,” he said.

Baker said Nodman ran a good race for the Bruins. Baker hopes for a cross country scholarship to college, but he is not sure which college he wants to attend.

Talahaftewa, a sophomore, said finishing second was disappointing because he didn’t want to be on the team that lost the streak. He said the Bruins did not run to their potential because of all the pressure. Talahaftewa said he ran a good race because he’s usually Hopi’s fifth or sixth man and this time he was their fourth man. He said the weather was a little too hot, but didn’t impact his race.

“They outran us as a team and we didn’t run that well,” he said.

Talahaftewa said Nodman placing second overall was impressive. Talahaftewa hopes to get a cross country scholarship to ASU, but is unsure of his major.

“My mind was blown. I was in shock,” he said. “We didn’t run to our potential because we could have beaten their fourth and fifth man.”

Pashano felt he ran a good race because he finished 65th last year and improved to 30th this year. He praised Nodman for his second place finish. He hopes to get a cross country scholarship to Kansas University, but is unsure of his major.

“It was my fault. I could have run a better race. I got too relaxed. Somebody fell and we had to restart. If we didn’t have to restart we would have won it,” he said. “If we had a chance to do it again, we would take it, but it’s done. It’s frustrating because I’m a senior.”

Lomayestewa said Hopi High ran a good race, but NPA ran better. He credited Pashano with showing improvement from last year’s run. Lomayestewa hopes for a cross country scholarship, but has not decided where he wants to go to college.

Rolland, a freshman, said he was mad at the Bruins for coming in second since this is his first year running.

“Hopi ran a good race, but NPA ran better,” he said. “I felt like I could have done better.”

Rolland said the humidity impacted him because it made him feel sticky.

“I couldn’t breathe down there because of the humidity,” he said. “That’s why I felt bad.”

Rolland said Nodman ran a great race. Rolland hopes to get a cross country scholarship, but hasn’t decided yet where he wants to go to college.