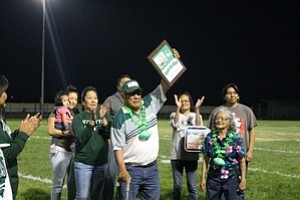 When Greeley and Edgewater were attending the school back in the 1960s, it was a small high school known as Eagles Nest Intermediate School.

Most of the Navajo and Hopi students in the Tuba City and Moencopi areas attended Richfield High School, where they could board during the school year.

Greeley and Edgewater were on the original six man football team, known back then as the Tuba City Rams, whose name was changed in 1962 to the Tuba City Warriors.

The football field at that time was not grass, it was dirt.

Greeley remembered those old days and said, “We were tough, playing on that dirt field….scrapes, scratches, fine, red Tuba City sand in our teeth.”

Greeley and Edgewater were instrumental in getting Tuba City High to its first Regional State Championship in 1961.

A new high school football coach was hired in 1962.

Buster Madriaga was the new coach and he wanted a big change for Tuba City, a new team name, a new mascot and a new, more aggressive and intimidating way of playing to win.

Madriaga asked the small student body to submit names and ideas for the team.

Edgewater and Greeley were seniors and they were both sitting in study hall. Edgewater kept looking at Greeley’s facial profile and started sketching what he thought a real Indian warrior head would like — fierce and intimidating.

Greeley’s side profile was the inspiration for Edgewater’s drawing for the team mascot and what is now known as the official logo of the Tuba City Warriors, now splashed all over Tuba City High Schools’ dark green and white school team items and on the interior of the two-story, multi-million dollar Warrior Pavilion sports complex building.

Another reason Edgewater wanted to use the Tuba City Warrior as the school symbol was because he wanted to honor all past and current Native military veterans. Madriaga used to tell his team, “He who hesitates, has lost” to help boost their team morale before a big game.

It was this do-or-die strategy that helped propel Tuba City High Warriors to its first state regional championship in 1961.

Greeley and Edgewater were honored with special Hall of Fame plaques, specially made Warrior blankets and lifetime tickets to all the football and basketball home games at Tuba City High School.

There is a special area set up in the Warrior Pavilion where the Hall of Fame plaques will be hung for the public to see. The plaques feature laser etched photos of the Hall of Famers in their senior year at Tuba City High School.

Greeley was at the halftime ceremony with his wife and family, but Edgewater, who had recently been admitted to the hospital, could not be in attendance to accept the honor. Edgewater’s wife and son accepted the award on his behalf.