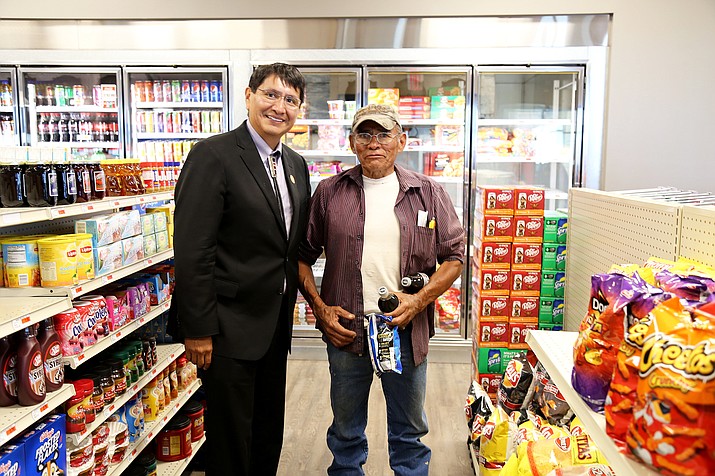 “I congratulate the community on your persistence to complete this project to the benefit your constituents. This is your dream, your vision, and your idea. Support and take care of this building. This project will serve as a catalyst to further developing this region,” Begaye said.

The Shonto Marketplace is located at the junction of U.S. Highway 160 and Arizona Route 98. The marketplace culminates the efforts of the Shonto Community Governance in bringing economic and tourism development to the area.

“Without the prayers from the community of Shonto, this project would not have been completed as quickly as it was,” Nez said. “This is the greatest example of self-governance and we celebrate alongside you.”

Shonto Community Governance Chapter Manager, Robert Black, Jr., said the marketplace has been a long time coming with initial conception having started in the 1970s. Black said in the early 1980s, ten acres were withdrawn for the project.

In 2002, infrastructure and water lines were installed and initial construction was completed in 2004. The Community Governance then sought funding to initiate the next phase of conceptual design. The next phase was funded by the Bureau of Indian Affairs in 2012.

“This is the year of development for the Begaye-Nez administration, we are actively developing more economic zones within the Navajo Nation to bring more businesses into the Navajo Nation,” Begaye said.

Vice President Jonathan Nez said the marketplace provides a critical component for developing tourism in the area by linking the communities between Page, the Grand Canyon and Monument Valley.

“It’s important that we start to brand the Navajo experience by capitalizing on scenic areas distinct to the Navajo Nation like Monument Valley, Canyon De Chelly and the Shiprock pinnacle,” Nez said. “The Shonto Marketplace is central to many scenic areas on the Nation and will showcase the local community.”

Vice President Nez said the Shonto community is moving forward on developing a hotel and artisan center near the marketplace.

“We have world-renowned artists, painters, basket makers, silversmiths and pottery makers. The artisan center will provide the locals an opportunity to showcase their work,” Nez said.

The Shonto Marketplace will be managed by Doug Adams, owner and operator of Sandia Oil. Black said the Community Governance preferred to have the property managed locally.

“We want to have the capacity to eventually take over management with our own operators,” Black said. “We have full confidence in the business experience of Doug Adams and know he will provide successful leadership in managing the marketplace.”

The marketplace includes a deli, gas station, and laundry mat. The laundry mat will be fully operational at the end of May.

The Office of the President and Vice President congratulate all the stakeholders who helped to make this marketplace possible.