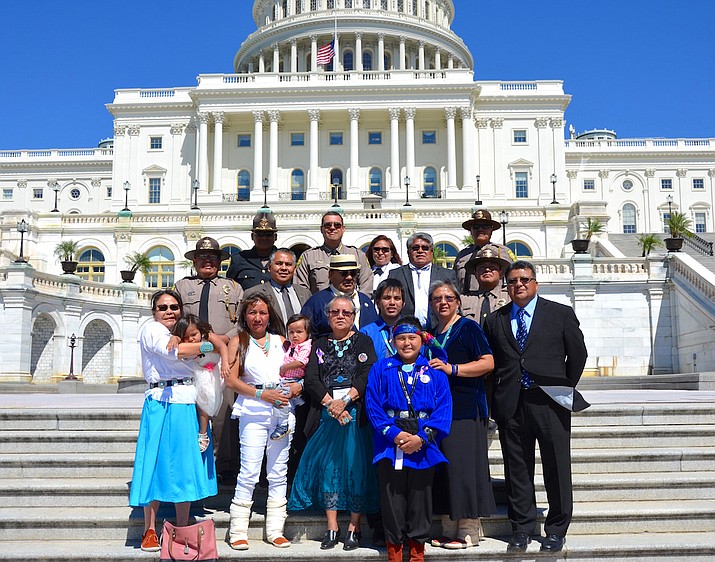 Navajo Nation Police Officer Leander Frank was one of the 118 officers recognized during the National Peace Officers’ Memorial Service in Washington, D.C. May 15. Submitted photo

Frank, who lost his life in the line of duty in August 2016, was one of the 118 officers recognized during the national memorial service.

Frank was from Pine Springs, Arizona, and served as an officer for over 13 years and ranked as a senior police officer at the Chinle Police District.

“The Navajo Nation was deeply saddened to learn the passing of Officer Frank in August. He was a brave, humble, selfless individual who dedicated his life to protecting our communities and our families. We need to continue to support the families of our fallen officers. The family sacrificed their loved one to protect our Nation and people. The family needs comfort and prayers during this difficult time,” Yazzie said.

Frank’s mother, Alice Yellowhair, his four children, other family members and five Chinle district police officers who worked closely with Frank, attended the National Police Week and were among tens of thousands of law enforcement officers from around the world to participate in a number of planned events to honor fallen officers that gave the ultimate sacrifice in the line of duty.

“Officer Frank was from one of the communities I represent. It saddens me that the family has to go through this tragic situation. No family should experience the pain of losing a son, father, and husband. As leaders, we need to protect our officers who go to great lengths to protect us daily,” Smith said.

“The committee will continue to address the issues and concerns of public safety on the Nation. As policy makers, we need to protect our officers and their families in the line of duty. Our Navajo families should never experience this,” Begay said.

The committee also attended the Department of the Interior Law Enforcement Officer Memorial Ceremony with Officer Frank’s family on Tuesday and met with U.S. Senator Tom Udall (NM-D), Office of Tribal Justice, the House and Senate Appropriations Committee, Native American Affairs Legislative Associate, and Indian Affairs Committee throughout the week to address the issues and concerns of public safety on the Navajo Nation.

“We will continue to support our officers at the local, state, and federal level. The committee’s priority is to address the critical need of public safety on the Nation,” Yazzie said.

Frank’s name will also be carved on the memorial wall, along with more than 20,000 officers who lost their lives in the line of duty, at the National Law Enforcement Officers Memorial in Washington, D.C. National Police Week is observed from May 15 to May 21.