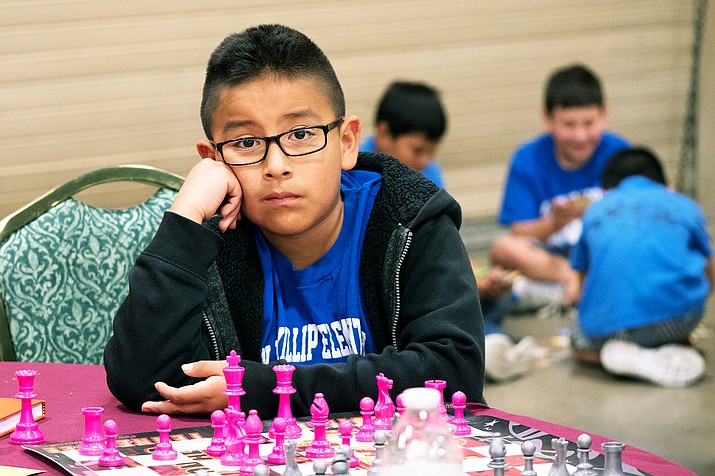 Killip Elementary School sent five teams from kindergarten, first, second and third grade and two teams from the fourth and fifth grades to the Super Nationals chess competition in Tennessee May 11-15. Photo/Vicki Uthe

FLAGSTAFF, Ariz. — Killip Elementary School's chess club brought home a title of national co-champions for one of the five teams that Killip sent to the Super Nationals in Tennessee May 11-15.

More than 5,500 competed in the championship and Killip players competed against more than 1,600 of them representing 272 teams.

Ted Komada, one of the coaches for the team, said Killip had five teams from kingergarten, first, second and third grade and two teams competing in the fourth and fifth grade section.

“We also threw one of our teams up against some middle schoolers to see how they would do,” Komada said.

The kids in the middle school section snuck into trophy contention at 18th place. The k-1 and k-3 teams took fourth place and one of the k-5 teams tied for first place.

“We plan on leaving the ‘co’ part of in the near future,” Komada said referring tothe co-championship title.

Komada said the kids come every day to chess with the notion of working at learning the game of chess.

“And that if you work hard enough at something in life, you create your own path to success,” he said.

The kids qualified to go to Super Nationals in an Arizona regional championship, where they swept first place in their sections. Komada said the families, who are a huge part of the success of the organization, also hosted the Arizona State Championship tournament in Flagstaff, where the Killip Chess Club reestablished their reign as state champions.

“The support this community provides our program never ceases to blow me away,” Komada said. “These amazing people have no obligation to help or support us, and yet, year after year, despite my insufficient thank you’s, they continue to provide for these kids. It makes me tearful any time I think about it.”

Komada said it takes a team to make all the success possible.

“I am surrounded by an amazing team of kids, parents, school and district administration, community members, funders and family that all work together to make us who we are,” Komada said. “Wouldn’t be possible without any one of those cogs performing as exceptionally as they do.”