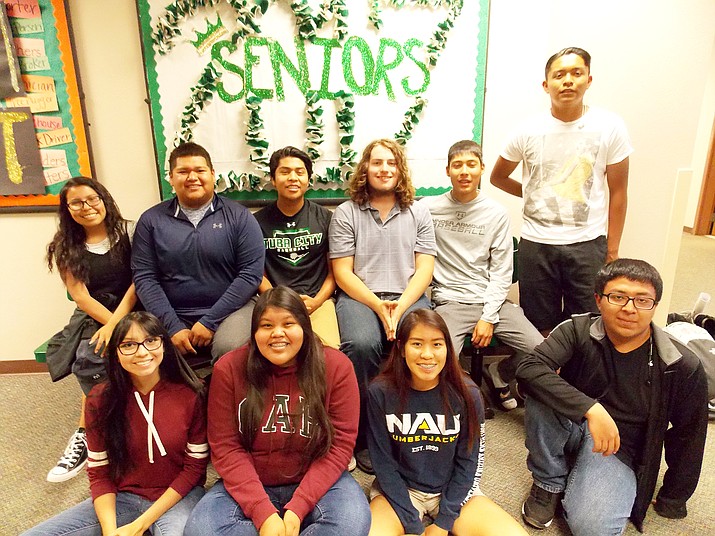 By Rosanda Suetopka Thayer, for the Navajo-Hopi Observer
Originally Published: May 16, 2017 9:59 a.m.
Tweet

TUBA CITY, Ariz. — It is not easy getting to the top of the academic heap at a competitive and large high school like Tuba City High School (TCHS), but 10 students achieved the Top Senior list.

TCHS senior level counselor Cheryl Onsae, who has had both the honor and complex task of working closely the students, said it was a pleasure to work with them and see them grow for the past three years.

“I’ve seen them grow and mature into wonderful young adults,” she said. “I just wish them all the best as they march into their next phase of life. My heartfelt congratulations to the class of 2017.”

Brandon Whiterock, 18, son of the late Lori Piestewa and father Bill Whiterock, also named his grandparents, Percy and Terry Piestewa as support for his academic success. He attended Tuba City High School throughout his high school career and has been accepted into Coconino Community College and hopes to get a degree in physical therapy. He also said his high school teachers, John Goatcher, Native Studies, and Effie Hyden, science teacher, as his favorite mentors.

Whiterock said he feels his serious study habits and motivation to learn has helped him immensely and credits his late mother Lori Piestewa for his inspiration to do well in school. Whiterock served as football club president, vice president of baseball club and also is a National Honor Society member.

James Roe III, 17, the son of Sandra and James Roe II, was born in Flagstaff but calls Tuba City his real home. Roe has been named 2017 valedictorian for TCHS. Roe has attended Tuba City schools from his pre-school years to his senior year. He has been accepted at three universities, including Northern Arizona University, Colorado State University and University of Montana, where he would like to study wildlife biology. Roe said five teachers as his academic inspiration, including Sam Aquino, Imelda Torres, Dr. Josefina DeJesus, Effie Hyden and Raelynn McCabe.

Roe has a special interest in anatomy, physiology, biology and AP biology. He feels that his “never give up” approach to class subject matter and studying really hard before a test has helped him the most in his academic success. Roe also credits his grandparents and his immediate family for his daily support and encouragement to do well in school.

Charles Henderson, 18, the son of Jennifer and Charles Henry Henderson, has been named as not just a Top 10 Senior, but he is also the 2017 salutatorian for his graduating class. Henderson was born in Tuba City and has been at TCHS for his entire high school career. He has been accepted to Northern Arizona University in Flagstaff, Arizona. Henderson would like to study bio- medical science and become a pharmacist once he graduates. He credits high school science teacher, Effie Hyden for his academic inspiration and getting him interested in the medical field. His main interest in biology came when Hyden showed him how to excel in his daily classwork by fine tuning his study habits. Henderson also said that asking questions has really helped him become a better student. He credits his mom, Jennifer Henderson, for her encouragement and setting the example for him to show excellence in his studies.

Jared Keams, 18, the son of Matilda and Steven Keams, attended TCHS throughout his entire high school career. He has been accepted to Ft. Lewis College in Durango, Colorado, where he hopes to get a degree in engineering. Keams credits his algebra teacher, Diego Dycok, as his academic mentor and teaching inspiration for a career in engineering.

Keams said his parents gave him daily encouragement and reminded him to work really hard so he could get a good scholarship to study out-of-state at a good university where he could experience a different lifestyle while working toward a formal degree.

Naismith Butler, 17, the son of Lisa and Kenneth Butler is a hometown Tuba City native. Butler also attended TCHS throughout his entire high school career and has also been accepted into college, but he said he isn’t really sure what he wants to pursue as a career yet. He hopes that with exposure to varied fields and new interests explored once he gets to college, he’ll find his area of interest.

Kandice Tanner, 18, is the daughter of Kendell Tanner and the late Willisandra George. Tanner was born in Phoenix, but moved to Tuba City where she has attended TCHS since her freshman year. Tanner has already been accepted into three universities: Northern Arizona University, Arizona State University and USU. She hopes to get a degree in nursing or public health administration.

Tanner credits four TCHS teachers with her success: Effie Hyden, Samson Aquino, Raelynn McCabe and Rob Windmiller. Tanner says that the mandatory tutoring that is offered through TCHS was extremely helpful to her studies and she recommends it to any student who is struggling with their studies.

She credits her dad, and her four best friends, Sophia Honahni, Syshon Tracey, Danisha Nez and Tyria Begay with supporting her and encouraging her to her final senior year success.

Paige Tsosie, 17, was born in Tuba City. She credits her mother, Sonya Acothley, her father, Verle Tsosie and her step-mother, Audra Tsosie, as her primary mentors. Tsosie has been accepted at Northern Arizona University and hopes to go into pre-med as her field of choice.

Tsosie credits Effie Hyden as her academic inspiration and also wants to recognize the early childhood education classes at TCHS to help set her goal as a pediatrician as her final career choice. She also credits her mom as her daily role model to do better, to work harder and to take school seriously.

Aaron Troglia, 18, the son of Tawna and Steven Troglia Jr., was born in Phoenix, Arizona. He also attended TCHS throughout his entire high school career and has been accepted at Northern Arizona University in Flagstaff hoping to go into the medical field.

Troglia says he would study all of his notes before any big test and that really helped him. Also, reading through the required chapters for each class were especially helpful. Troglia said his mom and dad also gave him continued support and talked with him about the importance of learning and doing his best. Troglia is a member of National Honor Society at TCHS and also played both football and baseball.

Danisha Nez, 18, was born in Tuba City and is the daughter of Priscilla Saganitso and the late Dandy Nez. Nez also has attended TCHS throughout her entire high school career and has been accepted into three universities. She hopes to go into the health field and become a cardiovascular technician or a dental hygienist.