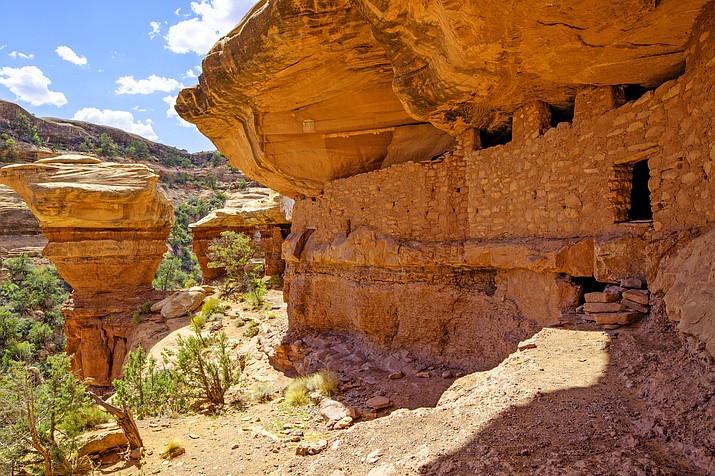 The recently-established Bears Ears National Monument is currently under review. Cedar Mesa Moon House is one of several Native American ruins located across the twin mesas.

FLAGSTAFF, Ariz. — The public comment period for Bears Ears is open now and extends only until May 26, the Department of Interior announced May 5.

The limited time is a hardship for people who live in remote areas without access to the internet, said Sen. Martin Heinrich (D-N.M.), who is a member of the Senate Energy and Natural Resources Committee. Heinrich sent a letter to Interior Secretary Ryan Zinke calling on him to extend the public comment period and hold a public meeting of his review of the Bears Ears National Monument.

He said, the Pueblo of Zuni and the Navajo Nation, both located in New Mexico, are members of the Bears Ears Inter-Tribal Coalition along with the Hopi Tribe, Ute Mountain Ute Tribe, and Ute Tribe of the Uintah and Ouray along with support from the Pueblos of Acoma, Cochiti, Isleta, Jemez, Laguna, Nambe, Ohkay Owingeh, Picuris, Pojoaque, Sandia, San Felipe, San Ildefonso, Santa Ana, Santa Clara, Santo Domingo, Taos, Tesuque, Ysleta Del Sur, and Zia.

“Members of many of these tribes are my constituents. They must be provided with sufficient, culturally relevant opportunities to participate in the monument review process,” Heinrich said. “I ask that you extend the public comment period to 60 days, matching the comment periods for the other monuments under review, and hold a public meeting in the Bears Ears region to allow local communities to comment publicly.”

In his letter, Senator Heinrich pointed out that internet access is far from universal in Indian country. According to the Federal Communications Commission, 80 percent of New Mexicans — and 78 percent of Utahns — who live in Indian country do not have access to fixed broadband internet.

“Across vast reaches of the Navajo Nation, even cell service is hard to come by,” Heinrich said. “Moreover, cultural and historical practices bias a written comment process against those who come from an oral tradition. In many Native communities, traditional elders communicate solely in their native language and decisions on important issues are made only after extensive discussions. A respectful engagement process with tribal communities would include opportunities for public discussion and oral comment. Access to regulations.gov is unequal and heavily weighted toward urban, non-Native communities — those least affected by the decision of whether to shrink or repeal the Bears Ears National Monument.”