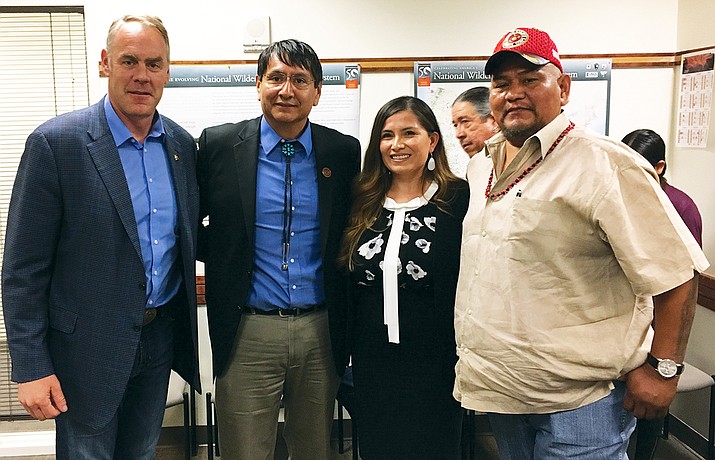 SALT LAKE CITY — On May 7, tribal leaders from the Bears Ears Inter-Tribal Coalition convened at the Bureau of Land Management office in Salt Lake City, Utah for the first official meeting between coalition leaders and U.S. Department of Interior Secretary Ryan Zinke.

Vice President Jonathan Nez was in attendance to advocate for the Navajo Nation’s position on the Bears Ears National Monument.

Zinke was joined by staff from the U.S. Forest Service and the Bureau of Land Management.

Vice President Nez said tribes are united in protecting the Bears Ears region — especially tribal cultural resources and the right for tribes to gather ceremonial herbs and medicines on the land.

Ensuring that the Navajo people have access and are able to perform traditional Navajo ceremonies at Bears Ears is another primary concern, he added.

“We look forward to working with Zinke to find a path forward for this very important sacred area,” Nez said. “I appreciate the tribal leaders being here as well. We all supported and continue to support, the national monument designation.”

Chairman Cuthair agreed and said tribes like the Ute Moutain Ute Tribe have ancestral ties to the Bears Ears, which must be protected.

“We’d like to preserve it, protect it, manage it. There’s a lot (of cultural resources) out there. This land is sacred,” Cuthair said.

Chairman Chapoose said the Bears Ears National Monument was the first instance for tribal nations to engage in the national monument designation process.

“Do we continue in this advisory role? Our knowledge is passed down generation to generation through the oral tradition,” Chapoose said.

“Our people have used that land for millennia,” Branch said. “We are protecting our cultures and beliefs. We need specific access for ceremonies.

“The land there is rich in resources. Our people chose to live there because of the richness of the land,” she added.

Delegate Filfred said tribal leaders stand firm on the designation of Bears Ears because of the inherent right to protect cultural and sacred lands.

Nez said the utilization of indigenous knowledge to protect federal lands is not a new concept.

“However, this is the first real move to have tribes at the table for stewardship of federal lands. We have made tremendous headway in order for tribes to reach this milestone. We do not want to go backward, especially after all this progress has already been made,” he said.

Zinke said, “It was an honor to meet with the leaders from the Inter-Tribal Coalition and I am grateful for their time. Tribal sovereignty matters and wheter it’s monuments, energy, education or economic development, tribal consulatation will remain a key pillar during my tenure as I ensure tribes have a seat at the table.”

The Navajo Nation will continue to work with the Trump administration to protect the Bears Ears National Monument.