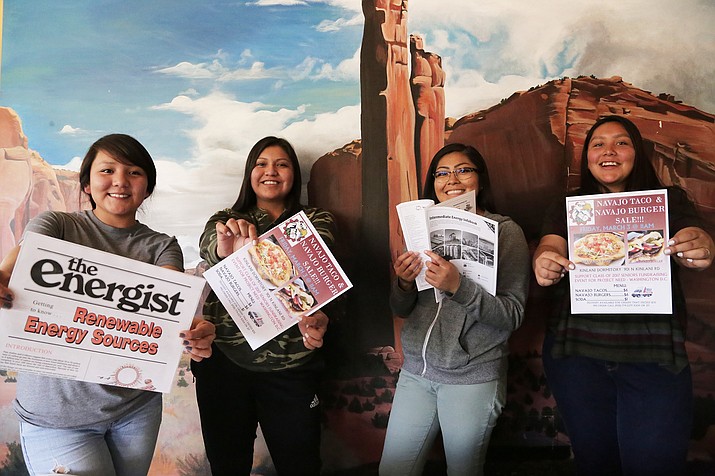 Native American students hold posters designed to attract attention to energy issues on the Navajo and Hopi reservations and throughout Arizona. Submitted photo

Students present their energy based projects to local communities in Arizona. Submitted photo

FLAGSTAFF, Ariz. — Seven Native American seniors were selected as winners of Arizona School of the Year and National Special Project of the Year for their energy education project by the National Energy Education Development (NEED) project.

The students attend Flagstaff High School (FHS) and reside in Kinlani Bordertown Dormitory during the week and go home to their reservations on the weekend. They have worked on the project in the evenings and in the afternoon on FHS early release days on Wednesdays.

Anderson said there has never been a Native American group who has attended the conference.

“This is the first one,” she said.

Ben said that it will be nice to just be there because of that.

“On top of that, it was National Special Project of the Year,” she said.

Naswood said hearing about the award was unexpected and they are excited to be going to Washington to educate those who do not realize the reservation exists and to help those people understand how important it is for them and their communities in Arizona and on the Navajo Reservation.

“We have been doing this for a while, but we just didn’t expect to win this type of award,” she said. “But it is understandable, because this is a problem that is going to affect us in the long run. So we gotta fix it now, somehow.”

The students’ goals for the project were to learn about energy and teach others; learn about energy sources and energy generating facilities in Arizona and solve an energy engineering challenge to find the best solution economically, environmentally and politically about the dilemma of closing or not closing the coal-fired Navajo Generating Station (NGS).

The students, who are all girls, said the NEED goals coincide with their own personal goals to advocate for the best policies and ways to use sources of energy to develop forms of energy that maintain a healthy environment to live in. The Native American Energy Advocates, which is what they call themselves, believe they are stewards of the Earth and all things on it and say they need to protect and care for them all.

The students not only researched and developed energy, they made a wind turbine and explored photovoltaic cells. They had a solar expert come in to talk with them and they presented their finding to elementary school with high Native American populations and peers.

Goal number three was perhaps the biggest challenge, in the middle of their project, NGS owners decided that the plant may close in 2019 instead of 2044. The students have been working on the project since December.

“We didn’t know what we were getting ourselves into,” Naswood said of the first NEED meeting they attended.

Ben said even though it was overwhelming it has been an opportunity for the students to learn more about energy and their community.

“We learned a lot,” she said. “We didn’t know what was going on on the Navajo Reservation and we live there. It’s a really mind blowing thing to think of.”

Begay said it has been interesting to go around and talk with people in the community.

“When we were talking to different people, they were telling us they didn’t even know that (NGS) was out there,” Begay said. “And that’s what supplied most of our electricity here. They started asking a bunch of questions like, ‘is there another plan, once [the station] shuts down?’ We told them, that’s what we’re here for, to try and figure out what we can do to help.”

The students think a goal of a hybrid plant of solar, wind and coal might be the best option during the transition. They talk about how on the Navajo Reservation there is constant wind and sun.

“Those are resources that could be beneficial,” Ben said. “For coal, it is just to keep electricity going when there’s no wind power or during the night time.”

Ben said the students realize that coal is not going to be there forever and alternatives need to be found.

“For Native American people, we are one of the most religious people, and connected to the environment,” Ben said.

Also, Ben said, she has seen first-hand the effect of working in the coal mine for some workers.

“My grandfather, I think he was one of the supervisors for the Peabody Coal Mine,” she said. “He didn’t know that he would get so many illnesses. A couple of years ago, when he retired, he found out he had Black Lung. To think about that, it is sad to think about how many people don’t know about that kind of stuff.”

Ben said some of the difficulties in finding a solution are that ideas are easy to come up with but not easy to execute. She was working on hydropower and found that finding a water source was a complication.

“I said, we can use the water from the Colorado River,” Ben said. “But we can’t because of the Clean Water Act and all this other stuff and because it is in a National Park. There are a lot of things you have to go through when you want to change a coal fired plant and it will take years.”

Ben said the students keep their hope alive by concentrating on the difficulties being in the present realizing if some change happens now there will be less worry about these issues in the future. She said there is a lot of time before the original closure date of 2044 for NGS.

“All this time in front of it is just being wasted by coal,” Ben said. “We could be going something in order for wind, solar and coal to keep going.”

Students have been fundraising to be able to go to Washington and to the conference. Anderson said the students need to raise about a $1,000 more for all the students needs. Anyone interested in donating may contact Theresa Boone-Schuler, CEO, Flagstaff Bordertown Dormitory, 901 N. Kinlani Road, Flagstaff, AZ 86001 or by calling (928) 774-5279 ext. 202.