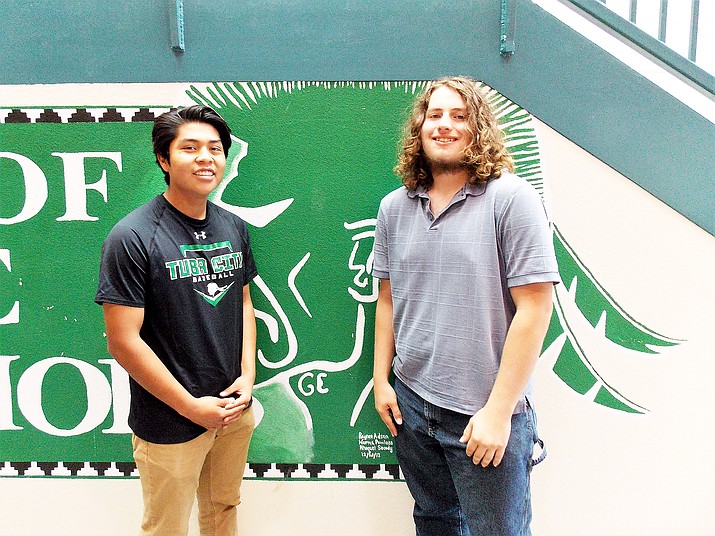 By Rosanda Suetopka Thayer, for the Navajo-Hopi Observer
Originally Published: May 9, 2017 9:36 a.m.
Tweet

TUBA CITY, Ariz. — Tuba City High School (TCHS) is a rich melting pot of ethnic cultures, including tribal and non-tribal members who support and encourage one another.

Teachers and staff are committed to helping build student confidence and high self-esteem as well as understanding and appreciating all cultures while working to succeed in a rigorous and challenging academic program.

This year at Tuba City High, James Roe III, 17, was named 2017 Valedictorian for his graduating class along with his classmate Charles Henderson, 18, who was named Salutatorian.

Roe was born in Flagstaff and raised in Tuba City. He has attended Tuba City Unified School District since pre-school.

Roe’s parents are both staff members of the school district. His mother, Sandra Roe, is the Exceptional Education Director and his father, James Roe Jr., is the Athletic Director for Tuba City High. Roe and his parents are a genuine, successful ‘rez’ product, experiencing tribal culture up close from the Hopi, Navajo and San Juan Southern Paiute tribes.

Roe has blended his own educational endeavors and close relationships with other students and friends who are both Hopi and Navajo. He has enriched his cross cultural upbringing preparing him for future academic experiences.

Roe was accepted at several universities, including Northern Arizona University in Flagstaff, Colorado State University and University of Montana with full scholarships. Roe is interested in a career in Wildlife Biology. Roe has had higher educational examples in his own home as role models and said he credits several of his Tuba City High teachers for inspiration and encouragement, including Imelda Torres, Dr. Josefina DeJesus, Effie Hyden, Rayelynn McCabe and Samson Aquino.

Some of his favorite classes at Tuba City High included Anatomy, Physiology, Biology and AP Biology.

“I always worked really hard and never gave up when I didn’t understand something,” Roe said. “I always studied rigorously before any test which really helped a lot, didn’t just want to leave it to chance. I also want to thank my grandparents and my immediate family for all their daily support and encouragement.”

Henderson has attended Tuba City High since his freshman year and has already accepted a full scholarship to Northern Arizona University in Flagstaff.

“She has inspired me the most in my high school studies and was originally who got me interested in the medical field,” he said.

Henderson says Hyden not only made her classroom projects interesting but also challenging. He said she would help students understand how to excel in her classroom, which brought a lot of satisfaction in his studying habits and work assignments.

Henderson said one of his secrets to academic success is to always ask questions.

“I think when you ask a lot of questions and get varied answers, it helps you to evaluate what the final answer really is. It helps you grow as a person too. To understand that there is sometimes not only one answer,” he said.

Henderson said every day his mother helped push him academically and said he gives her ‘full credit for all his school honor and success.’