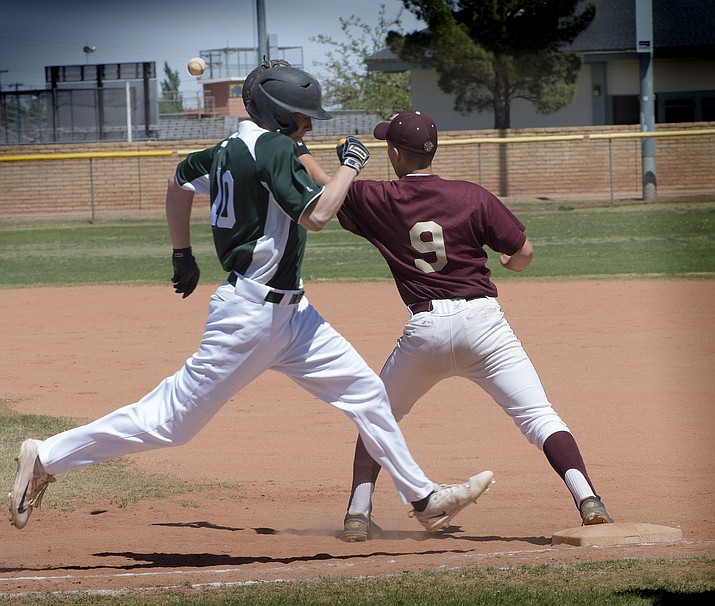 Nolan Robertson gets an out at first base. Photo/Todd Roth 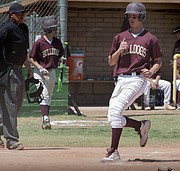 Jalen Lyons scores one of only two runs. Photo/Todd Roth 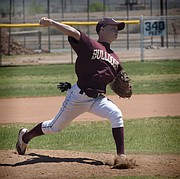 Jordyn Johnson got the win, going the full seven innings and giving up three unearned runs, on just four hits and two walks, while fanning six. Justine Butterfield was one for one. Harleigh Scott was two for three. Johnson and Gabrielle Gonzalez were two for four. Brooke Williams and Arianna Quinonez were one for three. Alicia O’Haco and Sierra Wilcox were one for four. Gonzalez had a triple, Johnson and Williams had doubles.

Sherreise Beaty got the win with relief from Johnson. Beaty worked four innings and gave up three runs on 10 hits and a walk. Johnson worked three innings and gave up an unearned run on two hits. Winslow had 14 hits, led by Johnson who was one for one and Wilson and Morgan Thomas who were three for four. Scott was two for three. Gonzalez and O’Haco were two for four. Quinonez was one for three.

In recent action, the Bulldogs lost to the Payson Longhorns 8-2 in Payson April 18. On April 21, the Holbrook Roadrunners defeated Winslow 8-2 in Winslow and April 22, the Flagstaff Eagles pounded the Bulldogs 16-2 at Vargas Field. The losses left the Bulldogs with a record of 9-14-1 going into Monday’s game with the Show Low Cougars at Winslow.

In the 8-2 loss to Payson the Bulldogs scored a run in the top of the first inning and another in the top of the third for a 2-0 lead they held until the bottom of the fifth inning when Payson rallied for seven runs and added another in the bottom of the sixth to win the game. Junior Villanueva took the loss, although he did not give up an earned run. Payson scored six unearned runs against him on five hits and three walks. He worked four and two thirds innings. They scored an earned run against Alec Williams on a hit and two walks. Nolan Robertson worked an inning and a third and gave up an unearned run on a hit. A. J. Huerta was one for one for the Bulldogs. Jalen Lyons was two for four. Brennan Sawyer and Guerrero were one for three. The Bulldogs only had five hits. Lyons had a double, the only extra base hit.