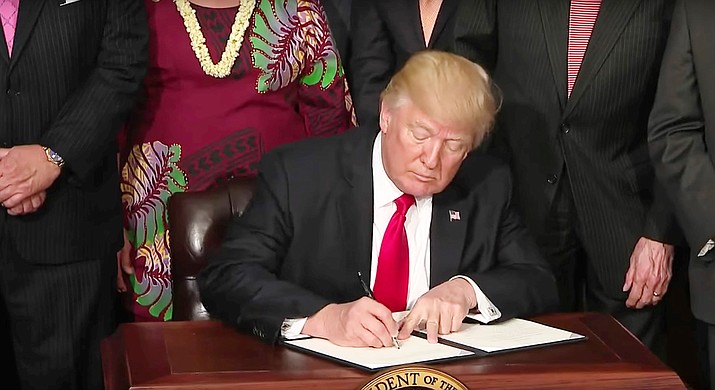 The order could lead to the reversal of national monument designations made since 1996 under the Antiquities Act, an early 20th-century law that lets presidents unilaterally protect historic, cultural and natural resources on federal land by declaring it a monument.

Trump, signing the order at the Department of the Interior, vowed to give control over local lands “back to the states and people where it belongs,” specifically citing President Barack Obama’s December designation of the Bears Ears National Monument in Utah.

The action was welcomed by Rep. Rob Bishop, R-Utah, a vocal critic of the Bears Ears designation and of what he called “long-standing abuses of the Antiquities Act.”

“It was created with noble intent and for limited purposes, but has been hijacked to set aside increasingly large and restricted areas of land without public input,” Bishop, chairman of the House Natural Resources Committee, said in a statement.

But Rep. Raul Grijalva, D-Tucson, said that national monuments designated by previous presidents are not subject to “Donald Trump’s whims,” and he vowed to fight back if the review ordered by Trump is just a pretext to “destroy a legacy of conservation built over decades.”

“Attempting to wipe national monuments off the map with the stroke of a pen would be illegal and unpopular, and this review will show as much,” Grijalva, the senior Democrat on the Natural Resources Committee, said in a statement.

Grijalva also questioned whether Interior Secretary Ryan Zinke would have enough time for public input on the more than 20 national monuments slated for review in the 120-day timeframe set out by Trump’s executive order.

“I’m concerned that Republican rhetoric on our public lands is being taken for fact and that Secretary Zinke is being set up for failure here,” Grijalva said.

In comments before the signing, Zinke said the order would not remove any monuments and would not weaken any environmental protections on any lands. But he said the Antiquities Act is due for a review, claiming that in recent years it has been too restrictive — placing public lands off-limits to grazing, fishing, mining and outdoor recreation.

“Somewhere along the way the act has become a tool of political advocacy rather than public interest,” Zinke said.

But if the administration tries to go beyond a mere review to rescinding some monument designations, as critics fear, it would be breaking new ground: While the president has the power to designate monuments, no president has ever taken one away, they said.

“The president has no authority to rescind these designations,” said Kevin Dahl, the Arizona senior program manager for the National Parks Conservation Association. “I don’t know why they’re reviewing it. They can maybe do a couple of tweaks, but I think it’s a bunch of political hot air.”

Dahl said that rescinding the designation on any monument would have to go through Congress, and any attempts made by the president to unilaterally make the change would face a lengthy legal battle.

The Antiquities Act has been key in protecting areas like the Grand Canyon and other iconic lands in the country, Dahl said, adding that “to dismantle it is nothing short of a betrayal to the American people and the land and history we’ve spent generations protecting.”