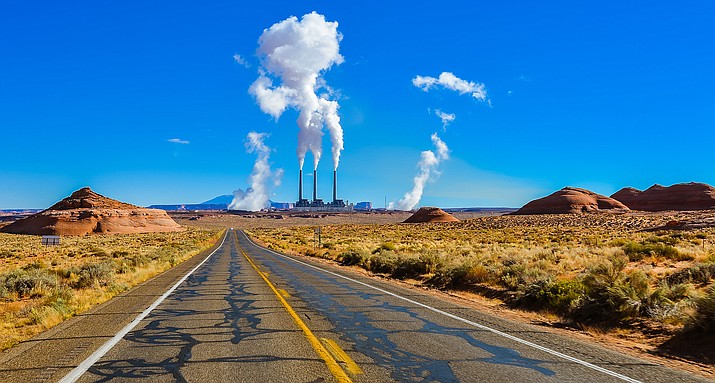 Environmentalists lost their suit to tighten emissions limits on the Navajo Generating Station near Page, one of the largest coal-burning power plants in the West. But the ruling came after the plant’s owners announced plans to shut it down in 2019. Adobe stock

WASHINGTON — A federal appeals court rejected two cases related to the Navajo Generating Station, one that aimed to tighten environmental restrictions on the coal-fired power plant and another that questioned the process calling for the plant’s closure.

A three-judge panel of the 9th U.S. Circuit Court of Appeals on Monday turned away an argument by environmental groups that the Environmental Protection Agency (EPA) cut corners when it developed its plan to regulate nitrogen oxide emissions from the plant to reduce regional haze.

The same panel rejected a separate claim by the Hopi Tribe that it was improperly left out of discussions on the federal emissions plan, which calls for the plant to ultimately close by 2044 at the latest.

But the impact of those rulings may be overshadowed by the announcement last month that the power plant will cease operations after 2019, a decision that could mean “much cleaner air and water in the region” while posing a huge hit to the economy, especially for tribes in the region.

The environmental suit, Yazzie v. U.S. EPA, said the EPA failed to follow its own procedures that require use of the best-available retrofit technology – or BART – when developing emissions limits under the Clean Air Act.

Critics say the EPA plan for Navajo Generating Station does not go far enough as a result, but the appeals court said the EPA properly used a “better than BART” alternative.

“We’re obviously disappointed by the decision,” said Sandy Bahr, director of the Arizona chapter of the Sierra Club, one of the parties to the suit.

“Our contention is that there is responsibility to ensure that there is clean air for the people who live near the plant and good air quality in the region and that alternative proposal did not meet those requirements,” she said.

Bahr said the EPA’s plan, enacted in 2014, falls short of the better-than-BART requirements for clean air and water quality that are needed to invoke that alternative.

But Colin Wittman Bradley, an attorney who argued on behalf of the Navajo Nation, one of the plant’s owners, said the court’s decision was proper.

“The U.S. EPA’s plan was better than BART, and so it properly balances the haze reduction from NGS and takes into account the unique circumstances of the NGS,” Bradley said Tuesday.

Roger Clark, program director with the Grand Canyon Trust, said while he was disappointed with both rulings, they may not be so significant in light of the announcement of the 2019 closure by the plant’s operator, the Salt River Project.

“The (clean air) rules wouldn’t start until the end of 2019, when they were going to shut down one of three units at NGS,” Clark said Tuesday. “As it turns out the whole plant is going to be shut down. On the one hand we’ll have much cleaner air and water around the region, but it’s a huge economic impact for those at the plant and the mine,” Clark said, referencing the Kayenta mine that provides coal exclusively to the plant.

Clark said the Hopi were “blindsided” by news of the plant’s closure. The plant is responsible for 1,400 to 1,900 Hopi jobs, according to court documents, or 50 to 70 percent of the jobs on the reservation.

SRP said the coal-fired power plant was no longer economically viable at a time of historically low prices on the natural gas that fuels other plants. It said it would keep the plant operating until its lease ends in December 2019, pending an agreement with the Navajo Nation on reclamation of the site after the closure.

While regional officials look for alternatives to the closure, the Salt River Project released a statement Tuesday praising the circuit court’s decisions.

“We are pleased with both Ninth Circuit decisions,” the company’s statement said. “The court recognized that what EPA did was appropriate and within its authority under the CAA (Clean Air Act) and the Tribal Authority Rule.

“We also are grateful for the Technical Working Group process and EPA’s willingness to consider BART alternatives for NGS,” the statement said. “This confirms the importance of working together to find collaborative solutions to complex environmental issues.”