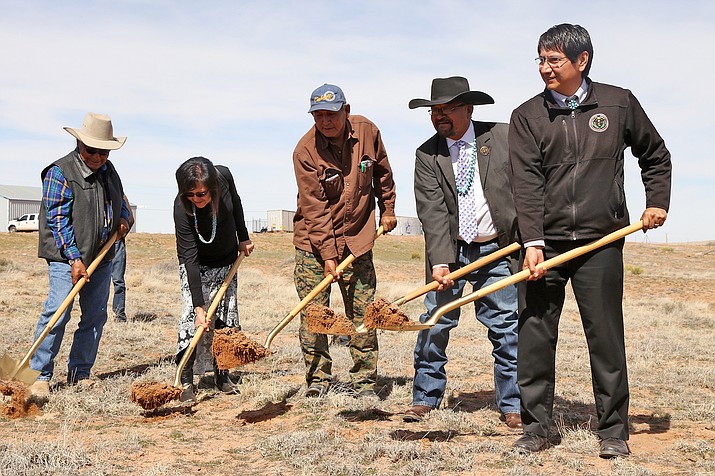 TEESTO, Ariz. — Before the groundbreaking ceremony March 10 for the new Teesto Chapter House, Vice President Jonathan Nez said the facility would bring healing to the community that lost their former chapter house to arson.

Nez commended the chapter for developing the new facility as a multipurpose building that integrates both youth and elderly programs.

“The Teesto Chapter worked very hard to get their new chapter house developed and soon to be built,” Nez said. “The new facility will include youth, senior and wellness programs. President Begaye and I want other chapters to look at Teesto’s facility as a model for development.”

The new facility will be constructed in the area of the former chapter house. The groundbreaking included addresses by local chapter officials, project-affiliated division officials and Navajo County Supervisor Jesse Thompson.

Teesto’s former chapter house burned because of arson in September 2014. The arson happened late at night and despite police and fire departments responses, the chapter house was lost to the fire.

On Nov. 8, 2015, Navajo Nation President Russell Begaye and Nez traveled to Teesto to sign a $2.9 million legislation to construct the new chapter facility.

Councilman Lee Jack Sr. said the project has been “a long time coming ever since the chapter burned down.” Jack thanked the involvement of the Office of the President and Vice President, the Navajo Nation Council and Navajo Nation departments.

“It’s finally happening and the people are happy,” Jack said. “It’s the beginning of a healing stage now.”

Nez said the new chapter facility would be a symbol of the Teesto community moving forward.

“We broke ground for construction of the new Teesto Chapter House today,” Nez said. “Thank you to our tribal council for approving the legislation and to President Begaye for signing it into law. It’s time that we heal from this tragedy.”