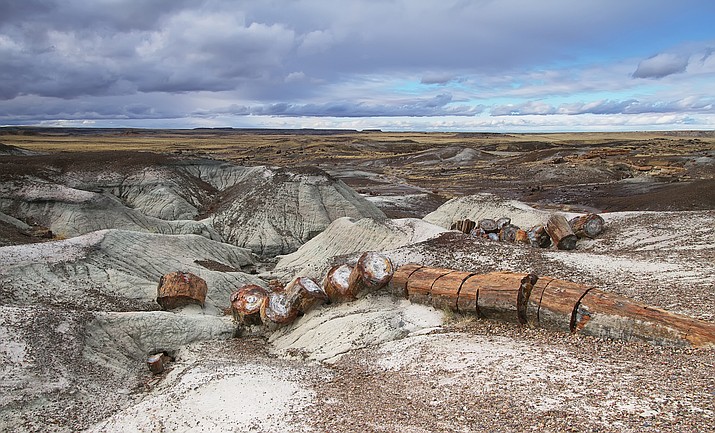 Blue Mesa Trail in Petrified Forest National Park is a one mile loop where visitors can hike among badland hills of bluish clay snd petrified wood. Named for its large deposits of petrified wood, the park's headquarters is about 26 miles east of Holbrook on Interstate 40. Adobe stock

Hikers cross badlands in the Red Basin area during the Grubes to Red Basin Hike. Photo/NPS

Petrified National Forest has undergone research in three separate locations, in addition to acquiring 7,000 additional acres. During this archaeological research and expansion, Petrified Forest National Park has undergone a transition that makes it easier for visitors to explore and recognize its ancient inhabitants and the treasure of trees.

“Did you know that Petrified Forest is more spectacular than ever?” reads Petrified National Forest’s webpage. “While the park has all the wonders known for a century, there are many new adventures and discoveries to share. There are backcountry hikes into areas never open before such as Red Basin and little known areas like the Martha’s Butte. There are new exhibits that bring the stories to life.”

Three years of research has determined there are more than 1,000 sites of prehistoric habitation at the park.

In order for the public to access the new discoveries, many new activities are offered: eight designated hikes, tours and group tours, backpacking and overnight camping, educational offerings for teachers and classes with no fees.

“Every Kid in a Park” family passes for all National Parks and new displays for those who like to explore with their eyes and not their feet.

There are also bookstores, gift shops, convenience stores, a gas station and a restaurant in the park with communities nearby with additional amenities.

Theodore Roosevelt created Petrified Forest National Monument on December 8, 1906. It was designated as a national park on December 9, 1962.

The brilliant colors in the petrified wood come mainly from three minerals. Pure quartz is white, manganese oxides form blue, purple, black, and brown, and iron oxides provide hues from yellow through red to brown. Annual visitation to the park is around 800,000 people.

More information is available at https://www.nps.gov/pefo/index.htm.