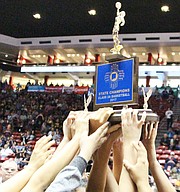 The 2017 New Mexico State 3A Championship Trophy is held high with pride by the Tohatchi Lady Cougars. Photo/Anton Wero

The second seed Shiprock Lady Chieftains (26-5) won the coveted 4A blue trophy for the sixth time by defeating the number one Hope Christian Lady Huskies, (28-3) 47 – 42.

An estimated 15,000 plus basketball fans, mostly from the Navajo reservation, watched history-repeating events unfold and were a part of it. The Shiprock Chieftains and the Tohatchi Cougars, overcame third quarter deficits and both teams took the lead with exactly a minute and six seconds left in the game and both brought the blue trophy back to their respective communities.

“Fans from everywhere, even from Tohatchi, stayed for the game,” said Shiprock Lady Chieftain Tanisha Begay in a post-game interview. “Just knowing that your community, your hometown and your neighbors were there to support you, because they believed in you. We’re just so thankful to have a crowd like that.”

Overcome with emotion, Shiprock head coach Henderson said, “They came in every day, practice and put in the work. You can’t ask for more than that. I am just really proud of them.”

Shiprock Lady Chieftains took an opening quarter 8-7 lead, fueled by Tanisha Begay’s trey. The much taller Hope Christian Lady Huskies went on a 16-4 run, going into the intermission break leading, 23-12 with most of the points coming via the paint.

The Chieftains cut into the deficit with a 15-10 run of their own, closing the third frame trailing 33 to 27. Midway through the final quarter, Chieftain coach Henderson, called a ful timeout with less than three minutes left in the game.

“I told the girls, ‘I know you all can shoot the ball very well,’ and I asked them, ‘Are we going out shooting?’” he said.

With a minute and 6 seconds left, Shiprock senior Paige Dale hit her only three pointer of the game and took the lead, 41-40. Shiprock’s Melanie Secody stole the inbound pass by the Huskies and was fouled while attempting a basket. The capacity crowd went into a frenzy. After Secody made the free throws, Shiprock went on a 4-2 run to end the game 47-42.