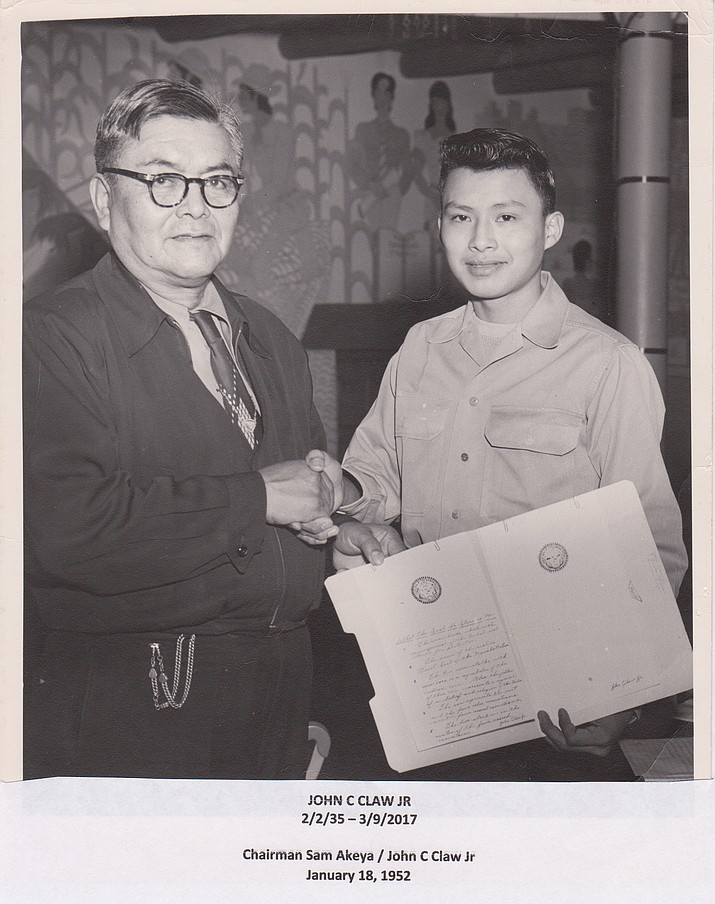 The Office of the Navajo Nation President and Vice President said it was deeply saddened to hear of Claw’s passing, as his contribution to the Nation’s identity is unequivocal.

“The Great Seal of the Navajo Nation represents our Nation in one simple, thoughtful emblem,” said Navajo Nation President Russell Begaye. “It signifies the essential core of Navajo life, culture and teachings and is identifiable far beyond the reaches of the United States. Today, in hearing of the passing of John Claw, Jr., our Nation mourns a great loss. But Claw’s legacy will extend far into the future of our tribe.”

According to Claw’s daughter, Eulalia Claw, her father passed away March 9 at approximately 6:15 a.m.  Eulalia said her father was taken to the emergency room at Gallup Indian Medical Center for complications stemming from heart related conditions. He passed away soon after.

Claw was born to Lula and John C. Claw, Sr. in 1935. His mother was from Dennehotso and his father from Many Farms. He was Bit’ahnii (Folded Arms People) born for Naakaii Dine’ (Mexican Clan).

In 1952, while attending Ganado High School, Claw entered a competition to design the Navajo Nation Seal. His design incorporated arrowheads, a rainbow, cornstalks, the Four Sacred Mountains and livestock. His design won the competition and became the official seal.

The Great Seal of the Navajo Nation has fifty arrowheads symbolizing the Navajo Nation’s protection within the fifty states. The opening at the top represents the easterly direction. The circular rainbow represents Navajo Nation’s sovereignty and as such the rainbow never closes on the Nation’s sovereignty. The sun is portrayed to shine from the east onto the four sacred mountains; Tsisnaasjini’ —Mt. Blanca, Tsoodzil — Mt. Taylor, Doko’oosliid — San Francisco Peak, and Dibé Nitsaa — Mt. Hesperus.

Vice President Jonathan Nez said that when he and Begaye meet with state and national legislators, they always establish the sovereignty of the Navajo Nation, which establishes the nation to nation relationship that exists between the Navajo Nation and the federal government.

“This principal of sovereignty surrounds the four sacred mountains and is protected by the arrowheads on the seal,” he said. “The ideology that Claw incorporates into the seal conveys strength, dignity, and above all, sovereignty. The seal holds great power, as does the Nation.”

In affording great respect to the John Claw, Jr., OPVP calls upon the Navajo Nation to lift his family in prayer during their time of loss.