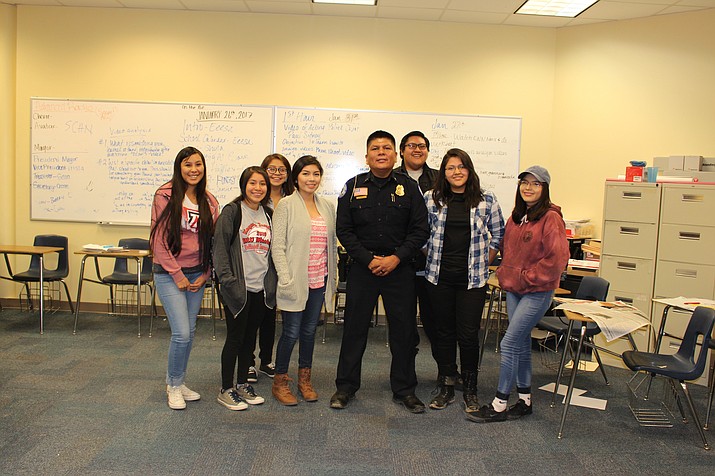 Sidney spoke to the media students at Hopi High School about his promotion and the priorities of the Hopi Police Department.

“It feels great to be given this opportunity to lead the department and get the organization back on its feet,” Sidney said.

Sidney, who was given the job as police chief for 60-120 days, said he is responsible for finance and budget, training for the officers and staff, equipment and prioritizing the day to day needs. He is also responsible for making sure the department meets today’s standards, along with the objectives and vision to do that.

Sidney said his top goal is retaining current staff by making sure they feel their work is rewarding.

His second goal is to give an honest self-audit of the department to see if it is meeting goals.

“If we’re failing, we need to find the strategies to fix it,” he said.

Sidney recently met with the vice chairman’s office, tribal council members and judges to discuss the direction of the police department.

“It’s not just about the chief,” he said. “We are all working collectively. This involves a lot of people.”

His third goal is to make sure the department has today’s computer-aided dispatch system.

“We look at the direction we are going today, and that’s being tech savvy with mobile devices,” he said.

Sidney said another goal is getting a new temporary facility for the police department and detention facility.

“You can’t have one without the other,” he said.

Sidney said the Hopi Police Department is working with the federal, state and tribal governments to obtain the new facility.

“We’re waiting for DC to give us the approval, but we will see earth moved soon,” he said.

As police chief, Sidney said he sees the youth as a vital part of the community. He added that as a 1990 graduate of Hopi High School that he bleeds silver and blue. He agrees with the elders who say that youth should go out into the world, get an education and come back to help their people. He noted that he has a teenager who attends Hopi High School.

“Be proud of who you are and where you come from,” he told the students.

Sidney said his main concern is drug abuse in the community. He recently lost one of his classmates to drug abuse.

“He passed away,” he said. “I take it to heart. These are people who deal with a lot of tragedies. We deal with people who have the worst addictions.”

Sidney said the symptoms of marijuana and meth include violence. He said it’s not just Hopi, as many Indian nations deal with drug and alcohol abuse.

“We need solutions to help our people,” he said.

Sidney said bootlegging has been a problem for 25 years going back to his parent’s time.

“We all have family members struggling with abuse,” he said.

Sidney questioned whether the lack of jobs on Hopi is a cause for the drugs and alcohol. He called it a fact, but not an excuse. He said high unemployment causes people to turn to dealing drugs or alcohol.

“We need better solutions. We need jobs and educational opportunities,” he said.

Sidney said the Hopi Police have 10 officers and two special agents with five job openings, including the chief’s job.

Sidney comes from a family of police officers. His father, Ivan, served as police chief. His brother, Ivan Jr., is a special agent. His uncle, Eddie, is a retired Department of Public Safety officer.

“I always wanted to be a police officer, so I reached out and took the challenge,” he said.

Sidney said he has many role models, but his father and mother are at the top of the list. He said students might think of their parents or grandparents as having older values that don’t fit today.

“But that’s where our faith and wisdom come from,” he said. “I’m glad I still have parents who can hold me accountable to be a good person.”