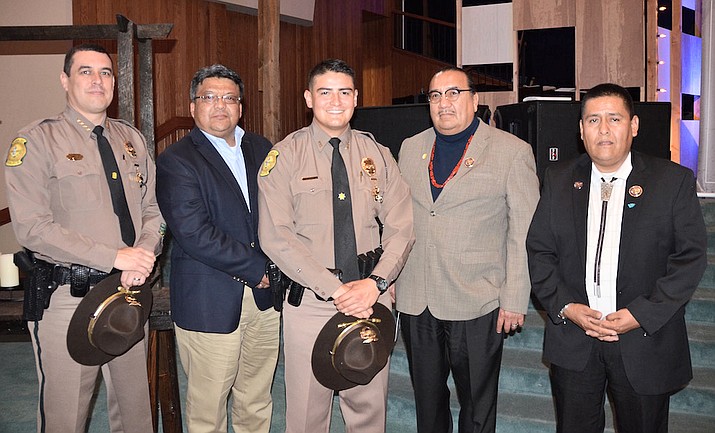 Members of the Law and Order Committee congratulate Tyler Lynch after completing the police academy. Lynch will work for the Dilkon Police Department. Submitted photo

Officer Lynch’s maternal clan is Táchii’nii (Red Running into the Water Clan) and born for Honágháahnii (One Walks Around Clan). He is from Sanders, Ariz.

“The committee is very proud of our Navajo police officer’s accomplishments. Being a police officer is a dangerous job but we want them to know that they have leadership support. We are happy to be here today to enjoy this special day for Officer Lynch and his family,” stated LOC chair Council Delegate Edmund Yazzie (Churchrock, Iyanbito, Mariano Lake, Pinedale, Smith Lake, Thoreau), who is also a former sheriff’s officer.

The Arizona Law Enforcement Academy is committed to preparing recruits for their next level of training within an environment of respect, self-discipline, strict accountability, academic achievement, integrity, teamwork, and professionalism. The graduates of class 496 completed 21-weeks of challenging training in academics, physical conditioning, and the skill areas necessary for a demanding, yet rewarding career in law enforcement.

“All officers need all the support they can get from family, their communities, and tribal leadership. It’s a challenging, dangerous, and rewarding career that builds character but they will need support and encouragement everyday,” stated Delegate Smith, who also has attended three police academy graduations to support Navajo police officers.

Officer Lynch stated that he had to travel back-and-forth from home to Phoenix throughout the 21-week academy and thanked his family for supporting him throughout his training.

“The committee needs to continue to work on establishing a Navajo Nation police academy within the Nation so our officers don’t have to travel far from their families. We had a police academy on the Nation before and it can be done again. This will be convenient and safer for our officers,” stated LOC member Council Delegate Otto Tso (Tó Nanees Dizi).

Delegate Yazzie added that the committee has prioritized and has been working aggressively to increase the number of police officers on the Nation.

“In October, the LOC increased the salary for Navajo police officers, which is effective today. The next goal is to create a better retirement plan for our Navajo officers. They deserve good pay and benefits because they protect our families and communities everyday,” said Delegate Yazzie.

Officer Lynch will begins his service with the Dilkon Police Department immediately.