County Supe, Lena Fowler to be honored with service award 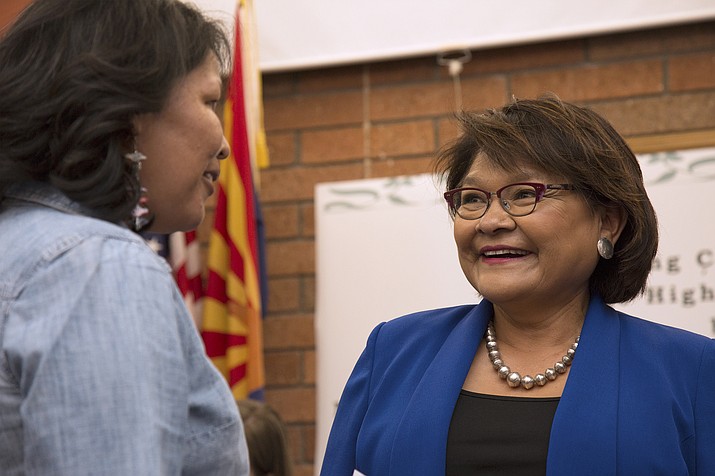 Coconino County Supervisor Lena Fowler has been selected as the 2017 recipient of the Coconino Community College Distinguished Service Award.

Fowler was selected for her outstanding contribution to the mission of CCC.

“It is a great honor to work with Coconino County Supervisor Lena Fowler and share in her vision,” said CCC President Colleen A. Smith. “She doesn’t just talk about issues; she gets things done. Supervisor Fowler is dedicated to serving Coconino County and has shown her commitment in bringing forward higher education opportunities. We at CCC are grateful for all her support.”

Fowler is now in her third term as supervisor for District 5, which includes Tuba City and the city of Page. Being Navajo and raised traditionally, Fowler has lived in Tuba City for more than 25 years and has been a part of a wide array of community service projects. She worked in the Office of Continuing Education and Dine’ College; was a founding member of Tuba City Concerned Citizens, an organization devoted to cleanup of uranium mine tailings; was a founding member and vice president of Tuba City Regional Health Care Corporation Board of Directors; was president of the Association for Indian Self-Determination in Healthcare; was president of Navajo United Way, Inc. and much more.

In recent years, she has been heavily involved in the development of a Higher Education Consortium Project located at the CCC Page Instructional Site. The project brings together CCC, Dine’ College, Navajo Technical University and Northern Arizona University to provide higher education and job training to residents of northern Coconino County.

“I am greatly humbled and honored to be receiving the Distinguished Service Award from Coconino Community College,” Fowler said. “Establishing the Page Higher Education Center has been a vision and a dream for quite some time. With dedication, collaboration and time, the dream has come true. Being recognized by CCC will add to our ability to implement this initiative.”

Fowler has also worked with the CCC Page Instructional Site student services coordinator to promote success for potential and current students; helped secure funding for dual enrollment classes in Page; organized efforts across the Navajo Nation to keep the Page Instructional Site open; and has been a speaker at several CCC events in Page, including awards ceremonies.

“Supervisor Fowler has been a tireless advocate for higher education opportunities for students in Page and surrounding communities,” said Lloyd Hammonds, CCC District Governing Board member. “Her efforts will help many students earn a college education and prepare for employment that will promote the economic vitality of our region.”

The CCC Distinguished Service Award recognizes outstanding service, leadership and support to the College and to the educational enrichment of Coconino County. Nominees must be a resident of Coconino County at the time of nomination, and they must have affected or substantially contributed a major accomplishment for the benefit of CCC and to the educational enrichment of district residents. The award is normally given to one recipient annually, and any resident of the county may nominate a person for the award. Current members of the CCC District Governing Board and individuals employed by the College are exempt from nomination.