Begaye: government to government relationship central to trust for U.S. and Navajo people 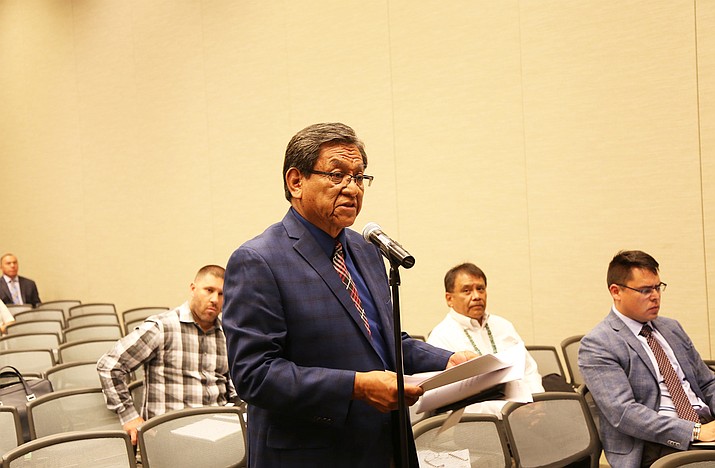 Navajo Nation President Russell Begaye told the DOI panel that the government-to-government relationship is central to the trust responsibilities that exist between the U.S. government and the Navajo people.  Submitted photo

PHOENIX — On June 1, Navajo Nation President Russell Begaye addressed a Department of Interior (DOI) panel calling for improvements to federal agencies that impact the lives of Native Americans across the country.

“The Navajo Nation has a long-standing government-to-government relationship with the federal government,” Begaye said. “This is central to the trust responsibility that exists between the U.S. government and the Navajo people.”

Based on a March 13 presidential executive order to reorganize the Executive Branch of the U.S. Government, the DOI organized six listening sessions to solicit input from tribal nations on how the federal government could more effectively streamline services to tribes and better fulfill its treaty obligations.

Counsel to the Assistant Secretary of Indian Affairs (ASIA) Miles Jansen told the tribal leaders that the DOI was there to listen to their concerns.

“We have no plan. Any suggestions would be helpful today,” Jansen said. “What changes to the structure would you recommend and what type of structure would improve effectiveness?”

The president said the timeframe put forth by the DOI to solicit commentary from tribal leaders was insufficient. In discussing matters such as public safety, education and a restructuring of the Bureau of Indian Affairs (BIA), 120 days is not enough time.

“The timeframe is inadequate in calling for such a sweeping review in such short notice,” Begaye said. “Tribes need to continually be at the table in this decision making process and not looped in after policy is drafted and after decisions are made. We provide comments to ensure changes are made based on the input we submit.”

Among many issues, Begaye presented concerns addressing tribal authority over land, efficient distribution of funding and attention to redundancy in tribal public safety. The president called upon the federal government to improve the effectiveness of the following agencies: the Bureau of Indian Affairs, Tribal Interior Budget Council and the Bureau of Indian Education.

“The BIA isn’t just another federal agency. They play an important role in fulfilling the statutory, treaty-based and policy-based trust obligations the U.S. has to Indian tribes,” Begaye said. “Reducing the size of the BIA could affect the fulfillment of trust duties the U.S. has to tribes.”

Begaye said the goals of the BIA need to be updated to support current priorities of tribal nations and the BIA should advocate harder on behalf of tribes in serving as liaisons between the U.S. and tribal nations.

He also asked for support in economic and energy development.

“The BIA should be filled with experts,” Begaye said. “We need the BIA to bring in economists, technology experts and energy and resource engineers to help tribes develop the resources located on their lands. Yet, we shouldn’t be treated like corporations as part of this reorganization.”

Regarding funding, Begaye asked the DOI for faster, more efficient distribution of funding saying the process of getting funding to regions after a budget or continuing resolution is passed can often take weeks.

“This has drastic impacts to public safety, health and education,” Begaye said. “This inefficiency must be addressed by automating funding distribution directly to regions away from Washington, D.C., as soon as it becomes available.”

Issues regarding land status and control over mineral and energy leases can often be stifling to progress in both resource and economic development on tribal lands. The president asked that the federal government and the DOI give the Navajo Nation full authority over its lands in entirety. He asked that federal approvals and sign-offs be transferred to the Nation’s authority.

“We need to remove red tape that prohibits development of Secretarial Lands and we’re requesting that Secretarial Orders be lifted on our lands,” Begaye said. “We believe there is an opportunity to review how land is managed and we support an option to convert these lands to restricted fee-like status. Beyond this we need authority over all our energy and mineral approvals.”

In conclusion, Begaye asked for the DOI re-organization to address redundancy in requirements regarding police officer training, expanded authority for the Nation over all crimes and criminals on Navajo land and timely completion of BIA/OJS yearly audits.

Begaye said the proposed reorganization is a great opportunity to bring the BIA into the 21st century.

“The federal government needs to continue to provide consultation and collaboration with tribes and to extend the initial comment period for the reorganization,” he said. “We are also asking that the DOI share the initial plan prior to finalization for tribes to comment upon.”