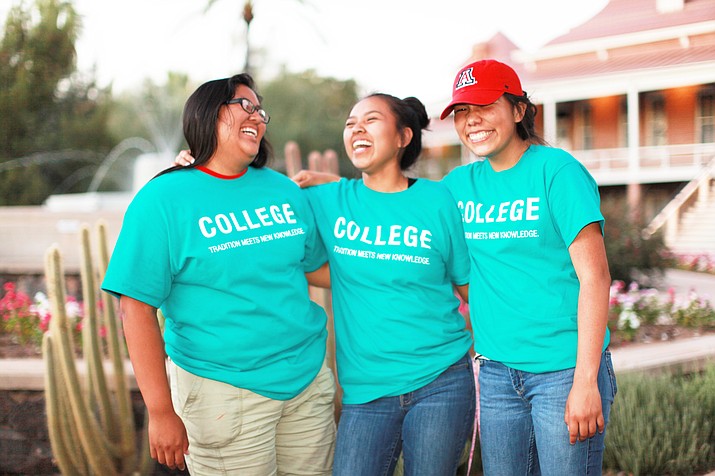 FLAGSTAFF, Ariz. — Twenty-four Native American students are participating in a year-long program designed to give them a vision of what a career in a science, technology, engineering or mathematical (STEM) field would look like.

The program is called the Native American Science and Engineering Program (NASEP) and of the 24 students who participated, 19 identified as either Navajo or Hopi.

The program connects students with academic professionals and industry representatives who hope to interest students enough to tackle and complete chemistry, physics and pre-calculus before they graduate from high school.

Another goal of the program is where college preparation, workshops and family events, students learn how to effectively prepare for the college admissions process, receive important information about academic success and are exposed to different STEM career paths.

Carol Seanez, coordinator for the Native American Science & Engineering Program (NASEP), said the program is important for Native American students because they face circumstances that many other students from more developed communities do not. Some of those things include: 30 percent live in poverty, 7.5 percent lack basic water, electricity or sewage and in places like the Navajo Nation, 40 percent lack running water and there is a high unemployment rate on reservations and for tribal people.

“Not only does this cause negative health outcomes, like diabetes, but it makes opportunities like college inaccessible for youth,” Seanez said. “Despite these challenges, we have smart, capable Native students who have a unique perspective on how to address the issues faced.”

Seanez said that one student, Charley Kelly, a Navajo Prep senor thought of a creative way of overcoming the lack of electricity in her grandparent’s Hogan. Kelly created a solar water heater for them to use.

“We need our youth in the arena of STEM to be able to make positive changes that so many of our tribes need,” Seanez said.

Seanez, who is an alum of the program herself, said tribes need youth in STEM fields to be able to make positive changes in their own communities, especially with a 70 percent graduation rate compared to 87 percent for non-Hispanic whites.

Seanez said that in 2015, only 14 percent of the Native population had a bachelor’s degree or higher. In fields that are math and science intensive, only 24 percent of minorities (not just Natives) will complete their degree in six years compared to 40 percent for non-Hispanic whites.

“NASEP is important to college access because student are able to live on a major university for a week while learning about STEM careers,” she said.

With the added help of college coaching on topics like college admission, scholarships and financial aid, students are given a vision of themselves in those careers and given the tools to succeed.

Kara McCabe-Joseph, who will be a junior next fall, recently got back from the week-long stay at the University of Arizona in Tucson. She said her interest in environmental science is what caught her attention about the program. McCabe-Joseph grew up in Moencopi and hopes to come back to the reservation after college to help with problems she sees.

She wrote her essay for entrance to the program on the water quality in the Moencopi area on the Hopi reservation, how uranium mines in the Tuba City area affect water quality and how that is tied to Hopi tradition in how they use water.

McCabe-Joseph said the experience of living on campus and experiencing college life was different than she expected and encourages other students to get involved.

“I thought everything was going to be strict with the program,” she said. “But they made everything really fun. I really encourage other students to join because it will give them an experience they haven’t had before, especially if they live on the reservation. It will expose them to new things and give them a better understanding of what they want to do when they go to college. It is a big opportunity.”

Jacob Utzler is one of 24 students participating in the Native American Science and Engineering Program. Submitted photo

Jacob Utzler, another student who attended the program and will be a junior next year, said he likes some of the environmental programs too, like environmental science, health or engineering. He is also interested in the medical field.

Utzler grew up in Crownpoint, New Mexico. He said the experience of getting to go live on a college campus for a week was great experience

“It opened up my radar,” he said. “Being in the dorms and college life. I think it is very important that you get experiences and hands on activities. It’s a great way for letting kids and incoming college students sow their oats and get used to being in college, going and actually experiencing it.”

In addition to the cultural based and team building activities, Utzler said the information on getting into college was especially helpful to him.

“They clarified a lot of question I had about college and being out there trying to apply for my goals,” he said.

Utzler said he was raised in a very traditional family, and also a Christian one.

“I was never really exposed to many things outside of that,” he said. “Once I was introduced to sciences and environmental sciences, the world just opened up for me. I was very interested in learning more and getting involved and using what I knew to better my community.”

Utzler said that his traditional way of life and his interest in science can and do exist together. He believes that science proves some of the traditional and religious stories that are used in everyday life.

“A lot of religions and teachings were talking about things that were unknown, like back in the old days,” Utzler said. “I think science clarifies a lot of things that were said in religions and traditions. They support each other. Great knowledge and great things can be gained if those things are put together and used in the right way.”

Utzler said the program teacheswhat is needed to get to college and how to be prepared. He said he might not be ready at the moment, but the program is helping him get there.

“It’s always great to be prepared,” Utzler said. “It’s definitely helping me get there and be prepared for what is going to come.

What the two students got out of the week-long portion of the program at U of A is exactly what Seanez was hoping they would learn.

Shawna Nelson, a Navajo student and Willem Martin, a Hopi student, help one another during the student’s computer build. Submitted photo

Seanez said the biggest gift the program gave her was connecting her to the Office of Early Academic Outreach.

“The staff was phenomenal in providing me with support and resources during NASEP and after I enrolled at the University of Arizona,” she said. “Their mentorship and guidance was a huge help in my successful navigation through college to graduation.”

Networking with other Native American professionals, some of whom work at IBM and Raytheon and grew up in places like Winslow, Tuba City and Shiprock, which is where participants in the program also come from. Those employees have degrees in engineering, computer programming and other fields.

“Being able to see people who look like you thriving in a career you are interested in does so much for ones self-efficacy (a belief in one’s ability to succeed in specific situations or accomplishing a task),” Seanez said. “I hope that the NASEP participant’s interactions with [the professionals] made [the students] realize their goals are obtainable, and [that] the advice the professionals gave resonated with the students.”

Seanez said Native tribes face issues stemming from food insecurity to a lack of running water and new technologies like aquaponics could be a way to address that issue. She said it is not sustainable or easy to haul coal and wood for energy, but without electricity, that is the only option for many people.

“Our people have always been scientists,” Seanez said. “Observing your surroundings and making decisions off of it is science, and that is what Native tribes did. Taking this traditional knowledge and using it as a guide for new techniques and discoveries is going to be important for our Natives in STEM. We need Native scientists, who, from their upbringing, are able to identify creative solutions.”

Her final piece of advice for students who are participating in the program or those who may wish to in the future to take to heart is to ask for help.

“Going to college is a huge transition, no matter where you come from,” she said. “I hope that students to not feel like they have to make this transition alone. I hope they know that there are people, like the staff at Early Academic Outreach and their professors, who are here, and care about their success — all the students have to do is ask for help.”

To view a digital story from one of the students, featuring the camp, visit the online edition of this article at nhonews.com.