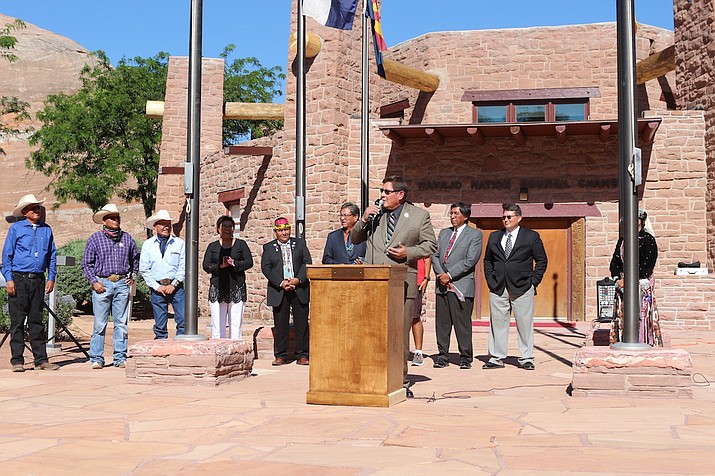 WINDOW ROCK, Ariz. — Navajo Nation Council Speaker LoRenzo Bates highlighted some of the combined efforts and sucess of the council in recent months on the first day of the summer council session last week.

Bates highlighted the successful passages of legislation providing $2.2 million for summer youth employment for all of the Navajo Nation’s 110 chapters.

He also spoke about the reformed Navajo Housing Authority board and confirmed four new board members to address the Nation’s housing issues and for legislation that approved a lease agreement with the owners of the Navajo Generating Station that he said secures over 800 jobs for Navajo people and a significant portion of the Nation’s annual revenue through 2019.

“Over the last several months, the Navajo Nation has encountered challenges related to our Nation’s current and upcoming budgets due to anticipated revenue shortfalls, federal budget cuts, and the possible closure of the Navajo Generating Station,” Bates said. “I am confident that the 23rd Navajo Nation Council will continue to make progress on our priorities and overcome adversities.”

The report also touched on several ongoing challenges the council and its Standing Committees are working on to address anticipated federal budget cuts that may affect critical funding for the Navajo Nation and the Nation’s continued support for the Bears Ears National Monument. Also included were issues protecting Navajo voting rights in San Juan County, Utah and the need to make progress on the Navajo Indian Irrigation Project.

“Although these issues may seem daunting, I believe it also challenges us as leaders to rise to a new level of ingenuity and creates an opportunity to be innovative, and to pursue new ways of providing for and empowering our people,” Bates said.

A large portion of the report also highlighted the progress of the Naabik’íyáti’ Sexual Assault Prevention Subcommittee’s advocacy at the federal level for an increase in AMBER Alert funds and policy research to improve laws that help prevent sexual assaults on the Navajo Nation.

The Council accepted the report from Bates by a vote of 16-0.