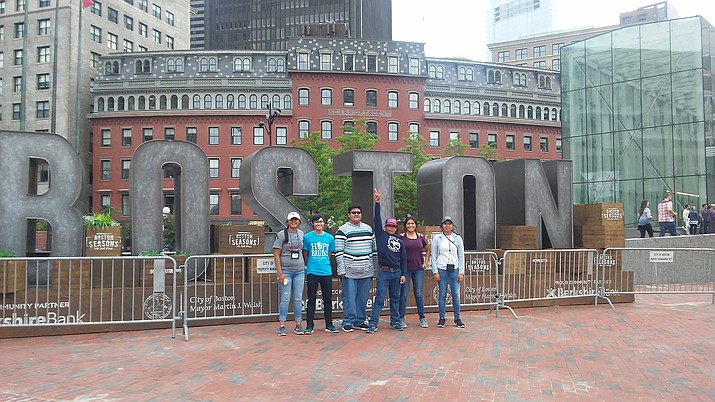 The six students on the trip attended classes taught by Harvard medical instructors.

“We attended lectures about drugs and its impact on the human body,” she said.

Labahe said she attended the program because she wanted to learn more about psychology and experience something off the reservation.

“I also wanted to bring something back to my community and set a good example for my siblings,” she said.

Labahe, who comes from the Navajo community of Low Mountain, said she can talk to community members about drugs and alcohol, and how those substances impact the body.

“There was one case where we learned why the patient was reacting the way she was, and it was because she was on meth,” she said.

Labahe said this summer medical program motivates her to consider a career as a psychologist.

“The research we did here was cool. We would look at problems and figure out the diseases,” she said.

Labahe said Harvard is a tough school to get into, but she plans to apply.

“I plan to apply to see if I have a chance,” she said. “Most Native Americans don’t apply because they don’t think they can do it.”

Labahe said attending a summer program at a college far away from home was a learning experience.

“I like home, but it was good to get away. When I stayed in the college dorms it made me feel more responsible,” she said. “I was really happy that I came here because I didn’t think I would ever apply for this type of program.”

Labahe said she thought the Harvard Hopi medical program would be overwhelming and too much for her.

“But I was able to do it, so I felt empowered,” she said.

Labahe said she appreciated that some of the speakers were Native Americans, such as Jordan Todd, who spoke about human anatomy.

Labahe said she learned that medical communication is complex.

“So I learned how to discuss complex topics,” she said.

Labahe said the students also learned about buprenorphine, which is used to treat opioid addiction.

Raelynda Bennett, Labahe’s mom, said she was proud of her daughter because she wants her kids to strive to do better. She was nervous about her daughter going to the other side of the country, but was glad she came back better prepared for college.

“She told us what they did and showed us pictures of the brain,” Bennett said about her daughter.

Labahe was also happy that she was able to go whale watching.

The only other school attending this program was from Fort Peck, Montana.