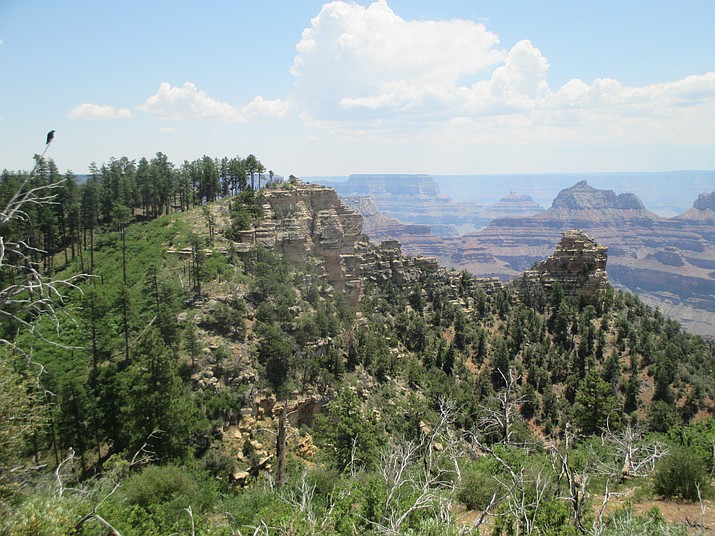 Widforss Traill is located off Highway 67. It offers views of the North Rim and Kaibab National Forest. Stan Bindell/NHO

Arizona Highway 67 from Jacob Lake to the North Rim may be the world’s best welcome mat. This scenic highway lasts for 42.5 miles. The forest along the first 10-15 miles suffered through a burnout, so this isn’t pretty, but once you get past this patch the scenery is a slice of heaven.

Large green meadows, one after another, keep popping with the green forest in the background to match. Deer and wild turkey were among the wildlife we passed on this welcome mat.

The Widforss Trail is about ten miles roundtrip starting at 8,080 feet and topping out at 8,380 feet. While there isn’t much elevation change, about 150 feet comes right at the start to get you huffing and puffing.

North Rim Park Ranger Jo Baird was kind enough to get a photo of grandson Nick with me. Just one of the many duties park rangers are proud to oblige.

There are still many up and down dips along this trail. The trail is in and out of shade, so bring plenty of water for when you get hot because there is no water along the trail.

There is a Porta Potty at the parking lot, but no other bathrooms along the way.

The first two and a half miles overlook the Grand Canyon with great views that seem surreal. One large boulder about a mile in goes out to a point where an unobstructed view is awesome. Grandson Nick Basham just had to go out there while vertigo just had me watching. A couple other hikers went out to see this view as well.

This hike is rated as moderate, but those who are not used to high elevation hikes may feel differently.

After the 2.5 miles, the trail dips into the beautiful forest full of ferns, aspens, firs, pines and spruces. There is also a decent amount of flowers including wild pink roses, firecracker penstemon and lupines.

The North Rim is known for the Kaibab squirrel with its large bushy white tail, but there is plenty of other wildlife including deer, mountain lion, chipmunks, Dusky grouse, wild turkey and gopher and king snakes.

Stellar’s blue jays are also known to be seen on this trail. While we didn’t see any jays, we spotted two beautiful Western Tanagers with their red heads, but looking yellow in flight. Just one more reason to take this trail.

The turnaround point for this trail comes at Widforss Point, which has a large cedar bush in bloom right in back of it. The views of the Grand Canyon from this spot again are beautiful and inspiring.

Of the 14 interpretive spots, number 10 is my favorite. This has to be the largest ponderosa pine tree I have ever seen. It is nearly 13 feet in circumference and the pamphlet estimates it to be 300-500 years old.