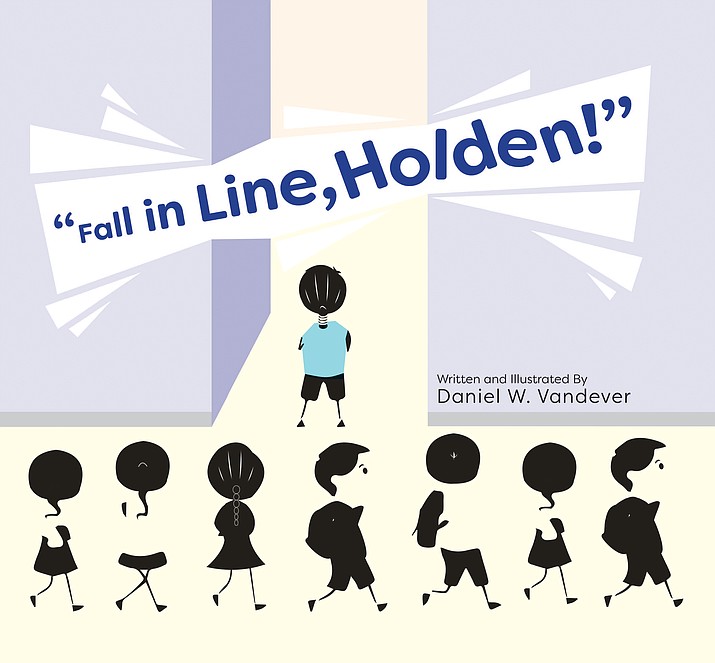 FLAGSTGAFF, Ariz. — “Fall in Line, Holden,” a new children’s book by Daniel W. Vandever, follows a Navajo boy through his day at boarding school and seeks to start a discussion about how that history still affects Native people today.

Vandever, who wrote and illustrated the book, is from Haystack, New Mexico, and is the communication director for Navajo Technical University where he also serves as an adjunct instructor.

He volunteers for the Crownpoint Rug Auction, providing technical support and helping local weavers sell their rugs. He comes from a long line of educators and is the grandson of Navajo Code Talker Joe Vandever Sr.

Through “Fall in Line, Holden,” Vandever wanted to provide an opportunity for people to discuss the history of boarding schools, either at home or in a classroom setting.

“Starting conversations is something I think is really necessary in addressing that past because there’s not really many places that that is taking place,” he said. “I figured, what more of an intimate discussion could you have than reading a children’s book to a kid or a grandkid.”

In the book, Holden is expected to conform to a rigid schedule and strict standards of behavior, but his inner life is filled with imagination and wonder, expressed in color, while the rest of the book and what the children see is black and white.

Vandever meant it that way. Holden is the only child in the book that sees in color while at school, the other kids conform, stay in their lines and follow the rules, as they are told to.

“It is only outside the confines and boundary of the boarding school that they are able to bring their world to light,” Vandever said.

While specific conversations are not Vandever’s goal, the book is a starting point for people.

“My intention is for any kind of conversation to take place,” he said. “Sharing stories of what happened, what was it like? Growing up for me, hearing all the stories from my father, it really provided insight into who he was, his experience as a child.”

Vandever said growing up on the Navajo Reservation and now working on it, it is apparent that things happening today are a direct result of that time period when people were told what to think and who they were.

“I think a lot of the problems that are happening stem from intergenerational disconnect,” Vandever said. “Not merely understanding where the other is coming from. I’ve experienced it working out here, living it, within my family and within the workplace or just everyday living.”

Vandever acknowledges that there is a negative connotation to the whole subject of boarding school, but he said boarding school was different for everybody.

“There are those individuals who went to boarding school and it provided them an outlet, or something to eat to survive,” he said.

Those stories are important, too.

“If those discussions take place then I think we can start moving forward in a way where everyone has input and ability to understand where everyone is coming from with less disconnect,” Vandever said.

Further complicating matters, there were waves of people who went to boarding schools, some as early as the 1880s, which were off-reservation boarding schools where kids were taken to Oklahoma, California or Pennsylvania.

“There were shipped off reservation to learn Western ways, but during that phase it wasn’t as severe, the loss of culture and language… to a certain extent,” Vandever said.

During Vandever’s father’s generation, in the 50s and 60’s, reservation boarding schools like Wingate or Crownpoint popped up and were different, much more like “Fall in Line, Holden” describes.

“What they went through, we were born off of that, so we had that base of Western education,” he said. “But what is inherent in the Navajo culture is to have those traditional teachings as well. We are in a unique period of being in a transition stage.”

Immersion schools are one example of that, where the schools teach only in Navajo and embrace what “Fall in Line, Holden” asks for — creative thought and a child’s own way of living in and understanding the world around them.

“The message isn’t limited to boarding school,” Vandever said. “I think it applies toward anyone in the nation (United States) who is putting a child through the education system today, especially with the cutbacks many schools face where art and physical education are cut. What does that do to a child’s creativity? What does that to a child’s development?”

With both the cultural and education background, Vandever said his generation can use those skills to move forward and turn the world into something that is authentic for them — part of that is telling stories and serving as a voice between both worlds.

“I think that is our responsibility,” he said. “That is how I see myself. It is something I need to do.”