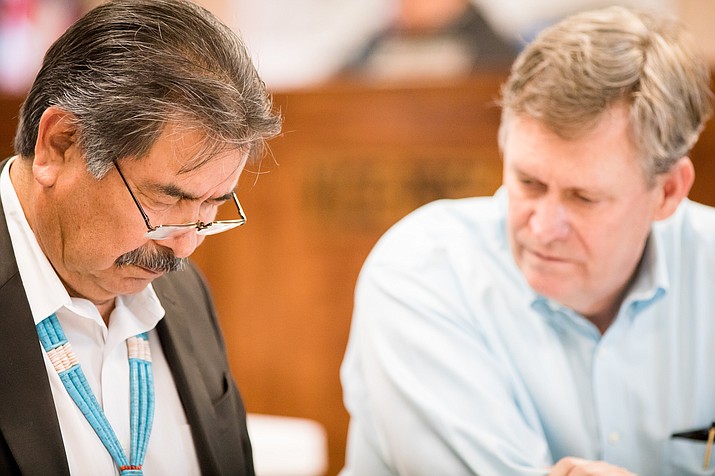 WINDOW ROCK, Ariz. — The Naabik’iyati’ Committee opposed Grand Canyon Escalade plans to build a gondola tramway and resort at the confluence of the Colorado and Little Colorado rivers July 13.

According to Save the Confluence, an organization made up of some families in the area who oppose the project, the committee — a subgroup of the larger Navajo Nation Council that vets proposed legislation — rejected the Grand Canyon Escalade development in a 14-2 vote. The lone supporters of the legislation were councilmen Leonard Tsosie and the bill’s sponsor, Ben Bennett.

The group indicated committee members said the $65 million the Navajo Nation is being asked to invest in the project could be better spent on such things as roads, scholarships and other infrastructure improvements on the reservation.

The master agreement would authorize the Navajo Nation Hospitality Enterprise to enter into a development and operating agreement, approve a non-compete agreement, waive certain provisions of the Navajo Nation Code and accept approval of the land withdrawal in the Bodaway/Gap Chapter.

Confluence Partners LLC, from Scottsdale, Arizona, hopes to build a gondola tramway delivering visitors to the canyon floor in about 10 minutes, a river walk in the canyon with an elevated walkway and a food pavilion. The area is located on the western edge of the Navajo Nation at the Confluence of the Little Colorado River and the Colorado River about 100 miles by road from Interstate 40 and Flagstaff, Arizona.

The 47,000 square feet of retail and restaurants on the rim will also include a Navajoland Discovery Center, specialty retail stores, restaurants, artist in residence studios, vendor markets, tourism information center, rim trails, entertainment lawn, public safety office, hotels, gas station, RV park and provide water lines, roads, electric services, sewer treatment plant and communications for the area, according to former Rep. Albert Hale, Confluence Partners agent. He said the tramway would be 1.6 miles long and approximately 3,200 feet from the rim of the canyon to the Riverwalk and the Riverwalk stops more than 300 feet from the Confluence and the preservation area.

In February, the Budget and Finance Committee voted against the legislation citing concerns about water, the community and questioning projected revenues.

Hale said the project could create nearly 3,500 jobs with employee compensation at about $39,000 per year in salary and generate revenue of over $50 billion in the span of 50 years.

At that time, Tsosie raised concerns regarding a non-compete clause in the legislation and said that Navajo-owned businesses and entrepreneurs should also be allowed to profit from the project, if it should be approved. He added that local communities should be a part of the discussion and have a say in the development of their chapter area.

Despite the committee’s opposition, the bill is expected to move to the Navajo Nation Council agenda July 17, when the council’s summer session begins, although the proposed agenda did not include it as of July 17 when the Navajo-Hopi Observer went to print.

The committee is the last of four that has considered and voted on the Escalade legislation. All committees have opposed the project except for the Resource and Development Committee, which voted to table the legislation Jan. 11.

The Escalade bill was buried deep on Naabik’iyati’s agenda until Sawmill Councilman Ben Bennett pushed to have the legislation heard sooner in the afternoon July 13. The committee agreed.

The council, which starts its summer session Monday, July 17, could approve or reject the master agreement between the developers, Confluence Partners and the Navajo Nation.