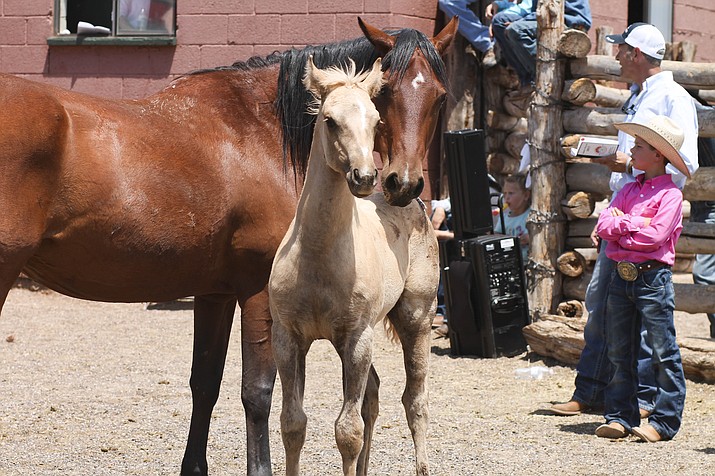 A mare shows off her colt during the 2017 Babbitt Ranches Colt Sale at Spiderweb Camp July 8.

A mare watches over her colt before the sale July 8.

Bill Cordasco, Babbitt Ranches president and general manager, talks about the tradition of the colt sale.

SPIDERWEB CAMP, Ariz. — Horses are a part of cowboy and American culture. These noble creatures play an integral part in American history, reaching back to the time of Spanish conquistadors and the exploration of the new world.

Today, the horse has endured and continues to be used for both pleasure and work, which, for some, is one and the same.

Babbitt Ranches, north of Flagstaff, is proud of its horses and the lineage of its famous Hashknife Brand.

Every year Babbitt Ranches holds its annual Hashknife Colt Sale where an average of 30-35 colts are sold.

The colt sale was formalized in the late 1980s as a way to sell off a surplus of colts. It started small, as friendly transactions between friends, with just a few colts sold. This year 25 colts and two yearlings were auctioned.

Established in 1886, Babbitt Ranches stretches across 700,000 acres of private, federal and state land in northern Arizona. It brushes right up against the South Rim of the Grand Canyon and neighbors the Navajo Nation to the east. The ranch runs around 8,000 head of grass-fed, open range, hereford cattle on the CO Bar, Espee and Cataract ranches that make up Babbitt Ranches.

The family owned ranch is an LLC and is operated by the Babbitt family through share holds.

For some of the Babbitt family, the colt sale is a way to remember their heritage and the rich history of their ancestors. It’s also serves as a way to bring together friends, neighbors, employees and buyers from across the U.S. and abroad.

“I think history and heritage are important and this (sale) is a big part of both,” said Jim Babbitt, a shareholder in the ranch. “This to us, is kind of fun, because it’s a community of the buyers of our neighbors on both reservations and the city people from Flagstaff and ranch people from all over. It’s a big community and we are just one part of it … it’s just so gratifying to have this community come together for one day and see some beautiful horses, greet each other and be thankful for the day.”

The ranch has been operating for more than 130 years and its cowboy culture is rich, which Bill Cordasco, Babbitt Ranches president and general manager reminded the crowd when he opened the sale.

Bruce Babbitt, who served as the 47th secretary of the Interior under Bill Clinton and governor of Arizona, said the ranch is doing well because it is well-managed, it is commitment to practicing good land management and it’s consistent practice of being good neighbors to those it ranches next to.

“You can look across the landscape and my nephews and the younger generation and the Howell’s and all of the employees … this landscape has been beautifully managed. It’s not overstocked, the land is in great shape and they’re managing a lot of wildlife as well as the cattle and the horses. It’s a whole unified vision of what you do with the land, it’s not just grazing it to death,” he said. “It’s been in the family for all these generations and we view this as taking care of the land in the long run. You don’t run a ranch like this for short-term. You run it because it’s a part of who you are and because it’s a commitment to being good neighbors and taking care of the land.”

With a long history in northern Arizona, Babbitt Ranches has fostered healthy relationships over the years with Flagstaff, surrounding communities and members of both the Navajo and Hopi reservations.

“I think it’s very good,” Bruce said. “I’ve personally spent a lot of time, not ranching but in public life, working with the tribal government in Window Rock and with the Hopis. You have to try to be good neighbors because there aren’t any fences. You have to have a nice relationship and not get too excited when cattle from one side is on the other side. You work everything out.”

Many of the colts sold during the auction go to homes and ranches on the reservations.

“There’s a lot of good Navajo stockmen who come here because they’re looking for horses and breeding stock so there’s a lot of Babbitt horse blood on the reservation now,” Bruce said.

While the colts are bred to be working ranch horses, they have the skills to be used in many competitive areas, including roping and barrel racing. However, after the colts are sold they go to a wide variety of homes.

“It’s great. Because that’s what they’re supposed to work for — all varieties of people,” said Victor Howell, foreman of Babbitt Ranches.

Howell said the colt sale is a passion project and allows him to match the perfect stud and mare to create some of Arizona’s highest quality horses.

“I love raising the horses. It’s a passion. It’s one of the passion projects. I’m not the only guy on the horse thing, every guy plays his part here. It’s the Babbitt’s sale,” he said. “If you’re a cowboy and you ride horses every day you have a passion for horses, it’s just the way it is. I really enjoy taking the confirmation and matching it up — and the pedigree and mind and matching it all up and doing the best that we can.”

After the sale, the colts live on the west side of the ranch and will be weaned over the winter and halter broke. Around March, as yearlings, they are picked up by their owners.