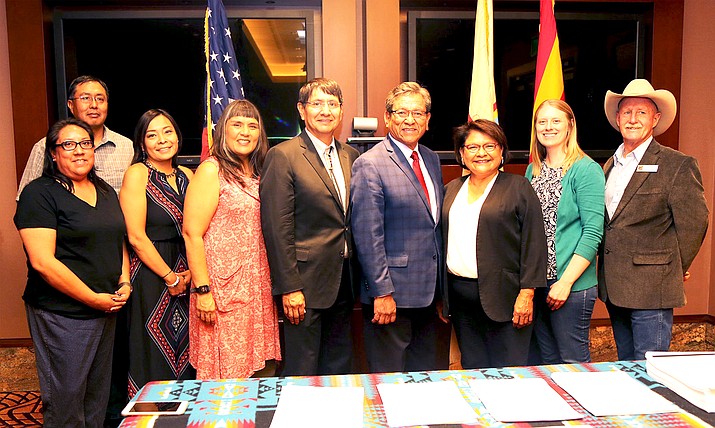 “Today, as we sign this extension lease, the Navajo Nation will become an energy tribe for the first time in its history,” Begaye said. “We will now have the capability of producing renewable energy and selling it to the world market.”

The president and vice president thanked the council for its effort in proposing and refining amendments to the agreement.

Among the amendments, the council introduced language clarifying the amount of water that NGS owners can use during the retirement period of the plant; introduced language assuring that nothing in the document waives the Nation's claims to water from the Upper Colorado River Basin and added language that helps guide how the owners and the Navajo Nation will seek to resolve potential disputes in the future.

“This was a great partnership with the three branches of government,” Nez said.

Begaye thanked the negotiation team and assembled task forces for standing their ground in moving beyond the terms initially put forth in the agreement.

“The owners threatened to walk several times but our team stood their ground,” he said. “Even after council approved the lease, we still had negotiations to do.”

“Ensuring that the dismantling and decommissioning of the plant was done in the correct way was a top priority,” Begaye said. “This signing is also about closing the power plant and making sure the Navajo Nation is not taken advantage of in the decommissioning process.”

“We can now go into solar and renewable energy development to sell energy directly to markets, towns and enterprises,” Begaye said. “The Nation has 500 megawatts to develop and we are already getting commitments from power companies who want to partner in buying renewable energy from the Navajo Nation.”