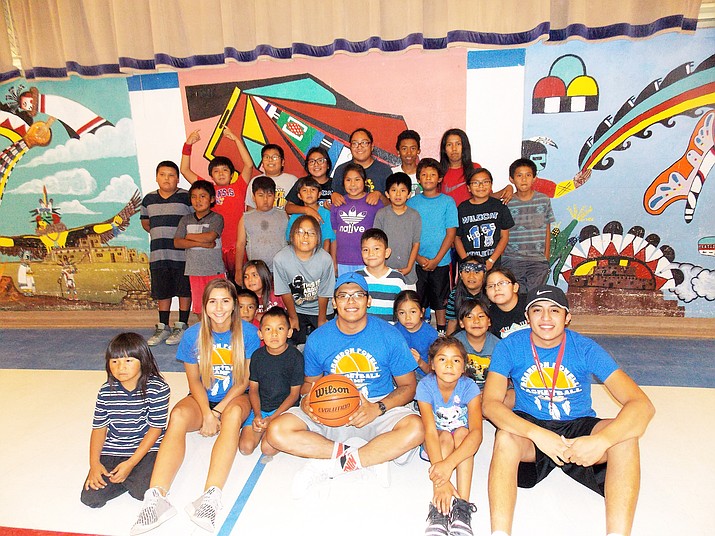 TUBA CITY, Ariz. — Each year, most parents look to find a rock solid summer camp learning experience that will enrich their children’s lives and academic growth and tribal parents are no exception.

This was the case at Hotevilla Bacavi Community School (HBCS) in Hotevilla Village, located on Third Mesa on the Hopi Reservation, this summer under the guidance of Principal Lorrie Harding.

A month-long summer enrichment program, which included STEM (Science, Technology, Engineering and Mathematics), art, dance, computer lab work, reading and a physical segment was provided by money from a grant from the Elementary and Secondary Education Act from the Bureau of Indian Affairs and the U.S. Department of Education.

A part of the physical well-being summer program was a special week-long basketball camp featuring three tribal members from the Pawnee Tribe of Oklahoma, who came to mentor and assist the HBCS students.

Students were taught how to hone their defense and offense court skills and also how to develop a basic everyday workout regimen that will assist them in the fall in their regular sports schedule.

Harding said this year was the second year the school was able to get money from the BIA through the grant to offer a solid summer program for the students. The 21st (CCLC) Century Community Learning Centers program provides both academic components, cultural, physical fitness and a parental involvement component for participants.

“While the HBCS summer program is focused on STEM activity, we want our summer school to blend easily with our regular school year learning schedule, which focuses on science and mathematical lessons,” Harding said. “All of the programs are designed to engage the student, while helping them to expand their academic skills and making connections between what they are learning and skills needed in the real world.”

Harding said the basketball camp was brought to the school’s attention by one of the student’s grandparents.

“This grandparent called our school and let us know that Brandon Powell of the Pawnee Nation from Oklahoma, who is an outstanding basketball notable in his state area, was available with his two team co-coaches to come to our school for a week,” Harding said. “One of the fundamental tenets of the 21st CCLC program is to prepare students for a successful life in the 21st century, teaching them skills that will benefit their families, their tribe and their home communities.”

The week-long basketball camp had local school oversight provided by Pam Ovah, physical fitness mentor for Hotevilla Bacavi Community School during the regular school year. Ovah worked with Powell, who was the head team coach for the summer program.

Powell, 23, an enrolled member of the Pawnee Nation, had two coaches along with him for the student camp in Hotevilla.

Powell graduated from Pawnee High School in 2012 and played two seasons for the Saints of Hillsdale Baptist in Moore, Oklahoma. He will attend Maranatha Baptist University in Watertown, Wisconsin this fall.

Powell says his love of the game originally came from inspiration from his father, David Powell, who played every day and was well-known in his own hometown gym for his basketball skill.

Powell credits his father for his knowledge and competitive spirit in playing basketball even now and hopes that he can inspire other younger students to play hard, play fair and stay fit.

Powell says that he feels like he was led to Hotevilla and that Hotevilla Bacavi School found him, not the other way around. He does offer his student basketball camp program through his social media site and contacts.

Powell said that he wanted to help students and teach kids who might not have the same opportunities as inner city or metro students have.

“I’m hoping that after we left [the school], that we left the kids with some real skills that they can use at the elementary level all the way to collegiate level ball,” he said. “I want it to be an opportunity to diversify their skills as well as creating a positive learning experience through basketball.”

Powell was surprised that he learned more about his own personal spirituality from his work experience at Hopi through the students, parents and staff members at the school. He did not expect that he would come away from the experience a better person for being there.

“Simply put, the Hopi lifestyle was so rich in tradition and so alive every day,” Powell said. “I have never seen a tribal group who holds their tradition so high and staying true to their roots. Being around their community that really wants their kids to reach their true career dreams but not forget who they really are really holds a special place in my heart now.”

Powell said that everyone he and his coaches met while at Hopi were gracious and kind and set the example for the kids they worked with.

“And that tribal tradition of showing and giving respect was an everyday thing for them,” Powell said. “That’s not something you see every day when you are in the city.”

“I couldn’t have held this summer basketball camp without them,” Powell said. “I am looking forward to coming back to Hopi and working with the students again.”